A Trip to Hadrian’s Villa near Tivoli

During our trip from Rome to Hadrian’s Villa near Tivoli, we’ll hash out a lot of important information. For example, there’s Emperor Hadrian’s very contradictory personality. In fact, one ancient writer describes him as “both severe and silly, serious and playful, contemplative and precipitous, stingy and generous.” And these contrasting qualities will translate into architectural extremes at his Villa. But how?, you ask.

Can A Villa Really Reflect Its Patron’s Personality?

Different parts of the Villa really seem to reflect the extremes in Hadrian’s temperament.  For example, the so-called Maritime Theater reveals Hadrian’s contemplative or retiring nature.  (A portion of it is seen in the picture.) In fact, it’s easy to imagine Hadrian retiring to this man-made island to escape insistent state employees, noisy maintenance crews, and bothersome foreign dignitaries. When Hadrian raised the gangplank, the island gave him solitude and the comfort of its sumptuously appointed rooms.

Instead the Canopus reflects his gregarious nature. Indeed it was an al fresco dining area for boisterous meals with high-ranking personnel and friends. And it included a nearly 120 meter-long fishpond. If that wasn’t whimsical enough, the pond was also fit out with marble crocodiles sculpted in a white stone laced with algae-like green veins. But where did its name come from? Ah, the Egyptian city, Canopus! After all, it was famous for its dinner parties and orgies. (Think of it as the Miami Beach of the second century A.D.!) The city was also connected to Alexandria with a long navigable canal. So, that explains the lengthy fishpond with its marble crocodiles! A detail of the “canal” lined with columns and statuary can be seen several pictures down. 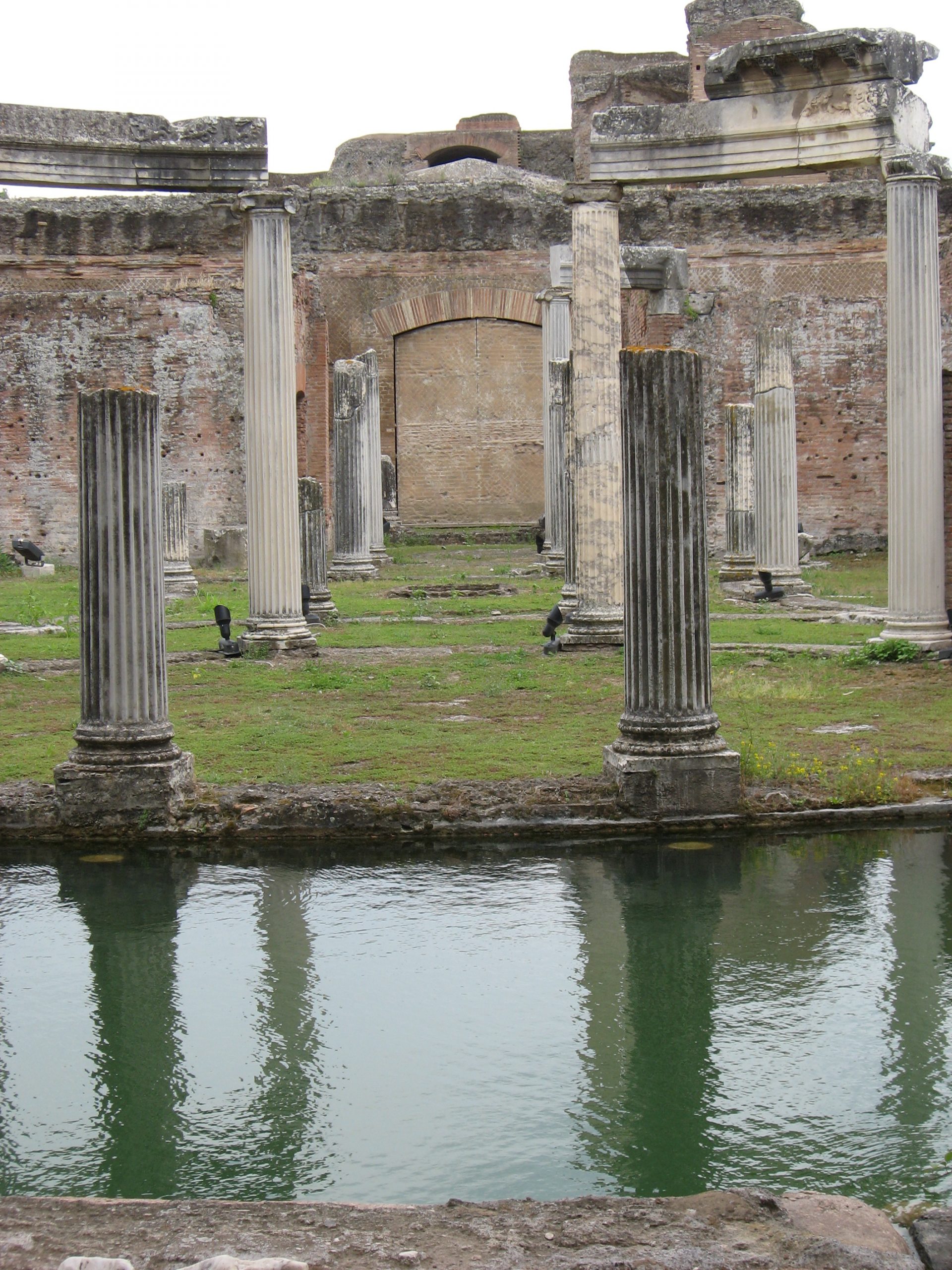 Hadrian’s Villa and His Obsession with Physical Fitness 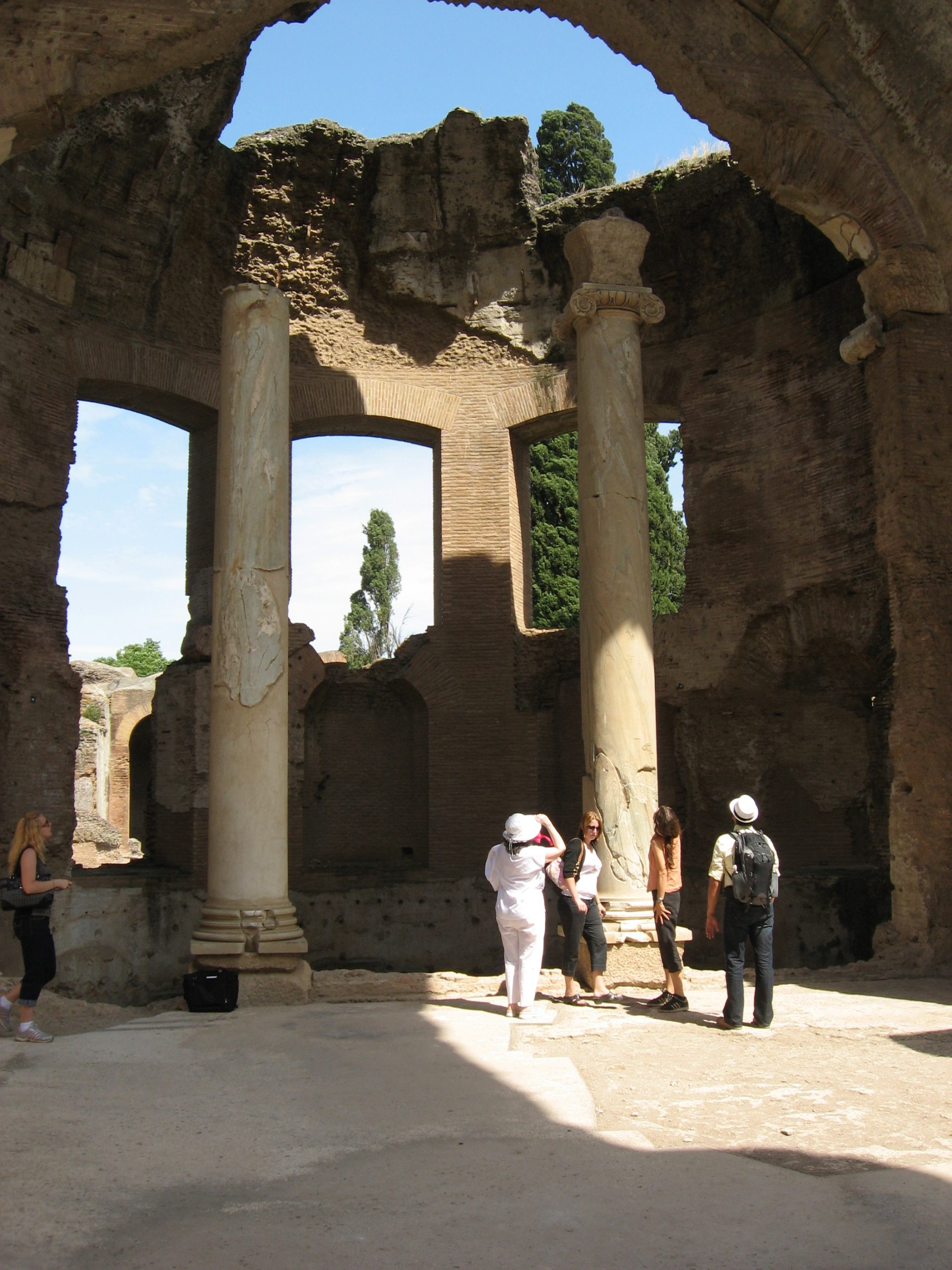 Then the ancient quote about Emperor Hadrian continues, contrasting his sophistication with his love of physical fitness. “He was tall, elegant… and his thick beard hid the battle scars on his face. From robust stock, he loved horseback riding, walking, swordplay, and javelin throwing.” Even Hadrian’s love of physical fitness shows up in his Villa! The Pecile is one example. Sure, it got its name from the famous 5th century B.C. colonnade in Athens’ agora. And it was indeed a colonnade or covered walkway in its own right. But Hadrian’s Pecile served as an open-air track! How do we know? Near it, archeologists found a Latin inscription that stated, “the walk around the portico is 1450 feet.” Incredibly, 1450 ancient Roman feet equals 2 miles or 3 kilometers. So, Hadrian’s Pecile was a grandiose step counter!

Of course, with his Roman passion for physical fitness came a Greek obsession with spas. In fact, two spas (or baths) grace Hadran’s Villa.  One of them, with its lofty columns, can be seen in the photo.

Hadrian’s Villa as an Epcot Center

Hadrian was also an insatiable traveler.  At least, ancient Roman literature describes him that way, when it discusses his long tours of inspection of the Empire. It also lists the buildings in his Villa that are named after the places he visited. As we saw above, he had a Pecile that loosely copied the original in Athens. His outdoor dining area was the Canopus, named after the city in Egypt. And there was even a Hades! Not that he had ever traveled there… but it was a great nickname for the service tunnels that run under his Villa! 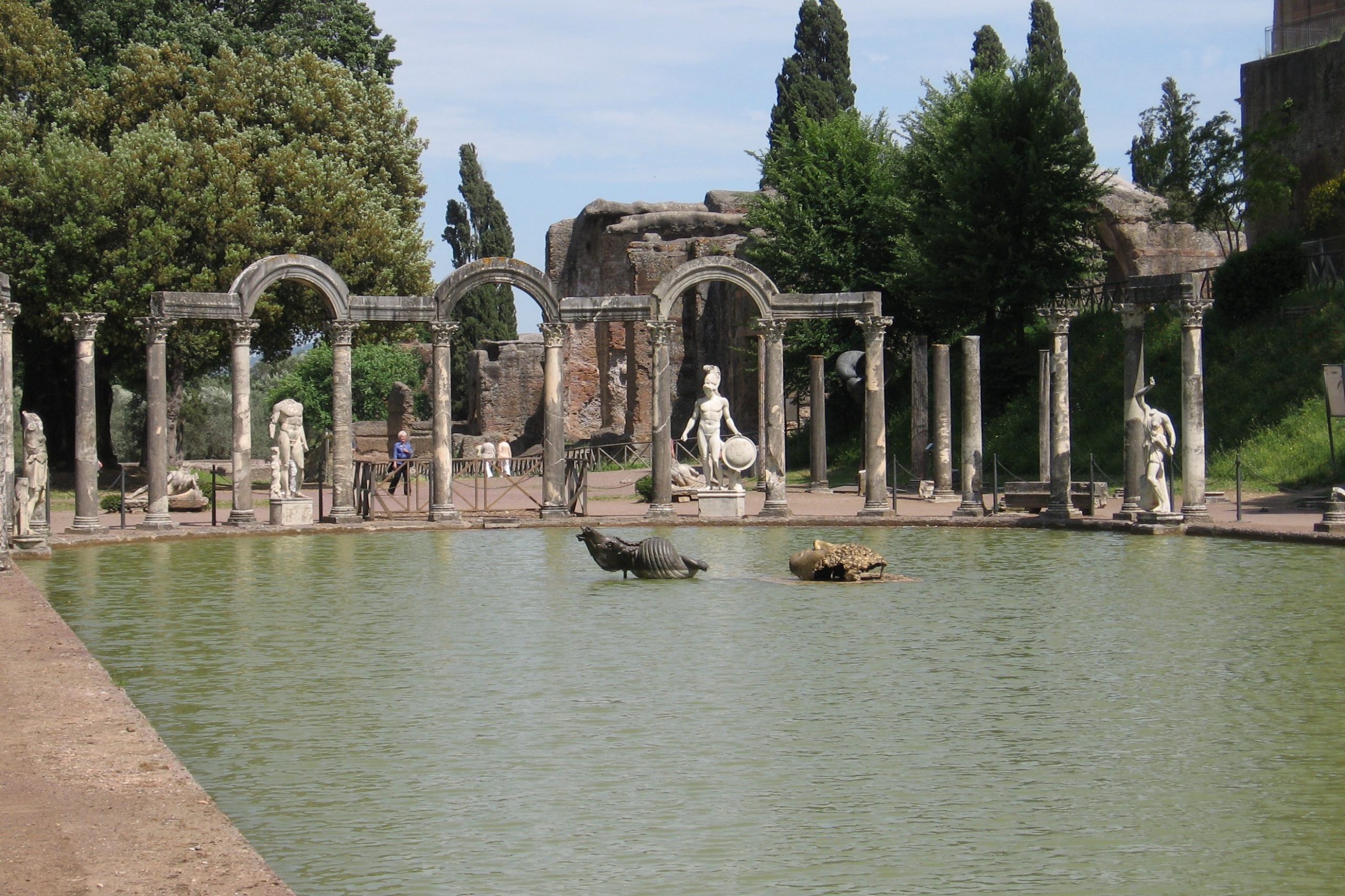 Daniella’s Advice For Your Trip to Hadrian’s Villa

Given Tivoli’s distance and the size of Hadian’s Villa, plan on a long half-day (i.e. at least five hours).

For travelers with the interest and stamina, Hadrian’s Villa can be paired up with the nearby Renaissance Villa d’Este and its unforgettable fountains.