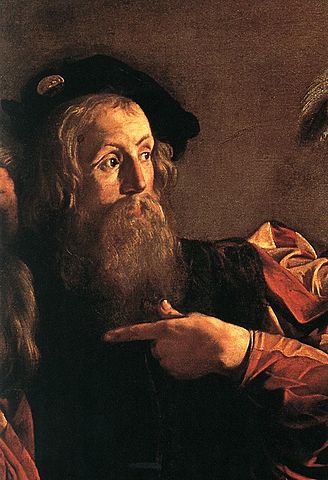 Caravaggio was famous for his theatrical life-style, which seems in keeping with the dictates of the theatrical Baroque era. He was also famous for his artistic innovations and his issues with anger-management. In fact, in 1606, the genius artist fled Rome after murdering a rival on a sports ground. It was once near today’s Via di Pallacorda. And that’s just a five-minute stroll from Piazza Navona, which was the center of Caravaggio’s world!

When Caravaggio first arrived in Rome, he played the starving artist with his bohemian painter friends. But that would change, when Cardinal Francesco Del Monte discovered him and his paintings. First he gave the hot-tempered youth a place to stay–in the cardinal’s own palazzo none the less! Then he provided him with a small stipend, art supplies, and the latest technology in lenses and optics. After that, Cardinal Del Monte helped him obtain commissions from his friends and colleagues, mostly high-ranking prelates.

Despite his vertiginous rise to fame, Caravaggio remained reckless and extravagant. The penniless 39-year-old’s death in exile proves it. But even his premature death could not damped his success. During his short life, he transformed the European art scene. And his vision and methods shaped those of other artists for a long time. Sure, some art connoisseurs found him and his style controversial, or even tawdry. But others recognized that he took art to an extreme and a depth of beauty that would never been seen again in Italy.

Where does our tour take us? First, we’ll meet in Piazza Navona, the heart of Caravaggio’s Rome. There we’ll discuss life in general in the 1600s. So, we’ll have a framework to better understand Caravaggio. Then we’ll look specifically at Caravaggio and how he interacted with the city. And we’ll stop in front of the Spanish Church of San Giacomo (Saint James) on Piazza Navona’s southern side. Here Caravaggio’s temper flared. And according to a contemporary police blotter, Caravaggio attacked a notary clerk with an ax. He felt it was legitimate. The notary clerk had offended Caravaggio’s girlfriend and model.

So, we’ll focus on this and other dramatic episodes in Caravaggio’s life as we explore his haunts. And strolling from Piazza Navona to Piazza del Popolo, we’ll discuss his habits, his personality, his training, and his revolutionary techniques that allowed him to “photograph” his subjects.

The first official stop on our Baroque Rome tour is the Church of San Luigi dei Francesi (Saint Louis of the French community in Rome). There we’ll admire three Caravaggio paintings in situ. They are his first public commission, and they constitute an amazing triptych. All three are dedicated to the Life of Saint Matthew. And we’ll focus on the paintings’ content, their significance for Rome in the 1600s, and the amazing techniques that Caravaggio used. A detail from the Calling of Saint Matthew can be seen in the photo.

Nearby is the Church of Sant’Agostino. In it is Ermete Cavalletti’s private chapel. While we are mildly interested in the benefactor’s life, we are far more taken by the painting he commissioned from Caravaggio. It depicts the Madonna of Loreto. And it made waves immediately. After all, locals recognized Caravaggio’s prostitute girlfriend, Lena, in the guise of the Virgin Mary!

Last of all, we will examine Caravaggio’s Calling of Paul and Crucifixion of Saint Peter in Santa Maria in Piazza del Popolo.  As usual, Caravaggio’s trademark realism includes dirty feet, human brutality, and a crude flash of light used to “photograph” the moment. The painting can be seen in the photo.

We can explore Caravaggio’s Baroque Rome and his Six Paintings in Situ whenever you’d like! But we need to keep in mind the three churches’ opening hours (which can vary):

Please remember that these churches’ dress codes are not normally stringent. But better safe than sorry! Make sure you can cover your knees and shoulders in a pinch. (Daniella recommends bringing a multipurpose scarf.)

If Caravaggio fascinates you, consider another Caravaggio tour with Daniella. For example, there are six more Caravaggio paintings at the Borghese Gallery! Or check out his repentant Mary Magdalene, saucy Saint John the Baptist, and Flight from Egypt at the Galleria Pamphili! Meanwhile Judith and Holophernes, Narcissus, and John the Baptist “live” at the Galleria Barberini. And then there’s the Fortune Teller at the Capitoline Museums!