“All That Glitters:” Christian Mosaics from the Late Empire to the XIII century

“All that glitters is not gold.”  Yet early Christian church mosaics in Rome prove the saying wrong!  Christian communities, local aristocrats, and popes (or their cardinal nephews) often had them decorated with lavish mosaics, whose most expensive pieces were made of gold and silver leaf pressed between crystal panes. Imagine their glitter! Especially during evening Mass as wavering candlelight shimmered over them.  Their glitter spoke of an afterlife and eternal rewards. As we admire them, we’ll discuss their symbolism and what they reveal about the early Christian Church. 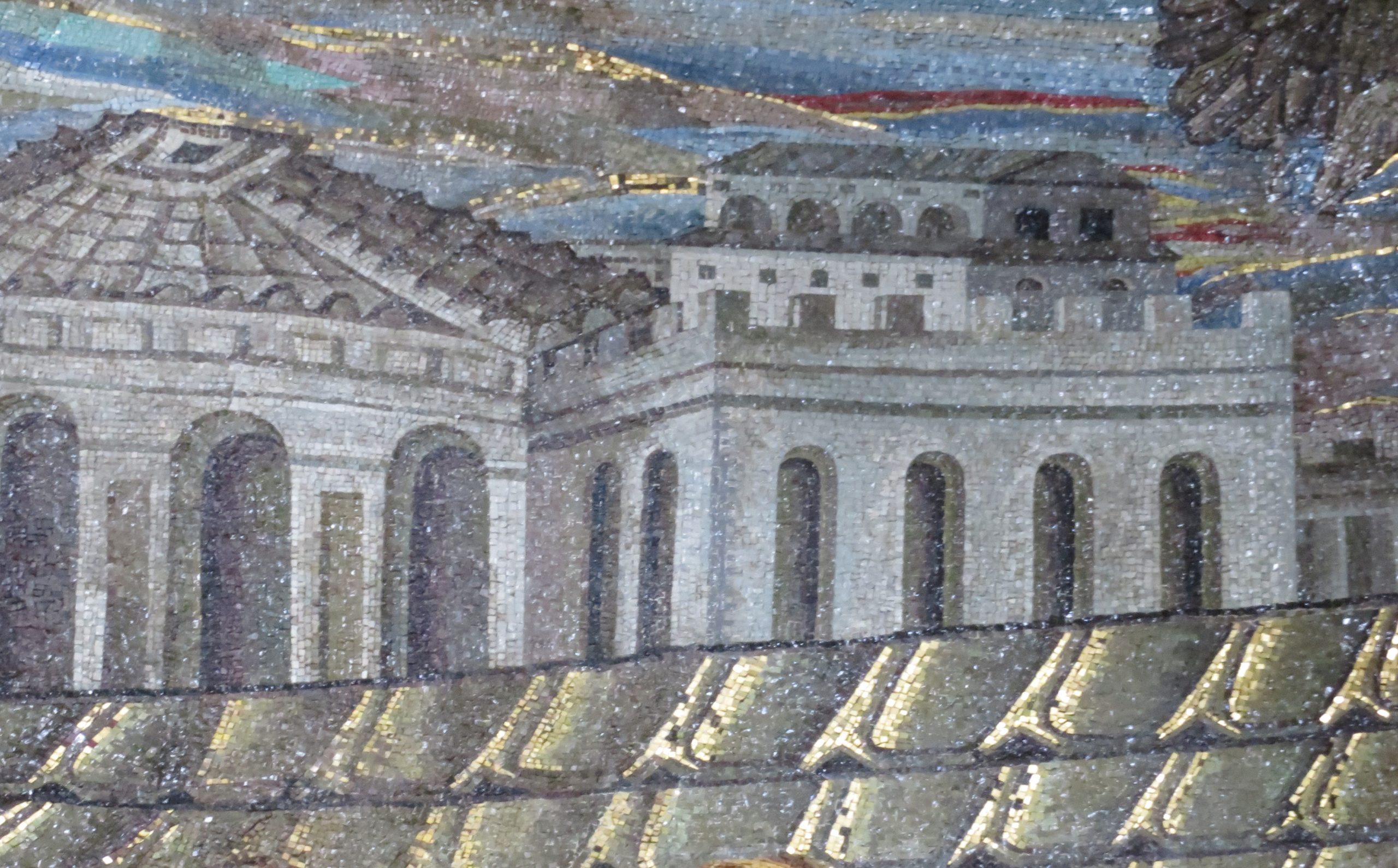 We’ll meet in the morning to accommodate all three churches’ opening hours.  We’ll head to the early Christian Church of Santa Pudenziana first, because it’s the oldest.  While Saint Pudentiana’s life and the church’s general history are fascinating, the apse mosaics steal the show.  Dating to the end of the 4th century A.D., they are the oldest surviving mosaics in a Christian church in Rome and an amazing work of art.  A detail of the mosaic, featuring the rooftops in a cityscape, is shown here. 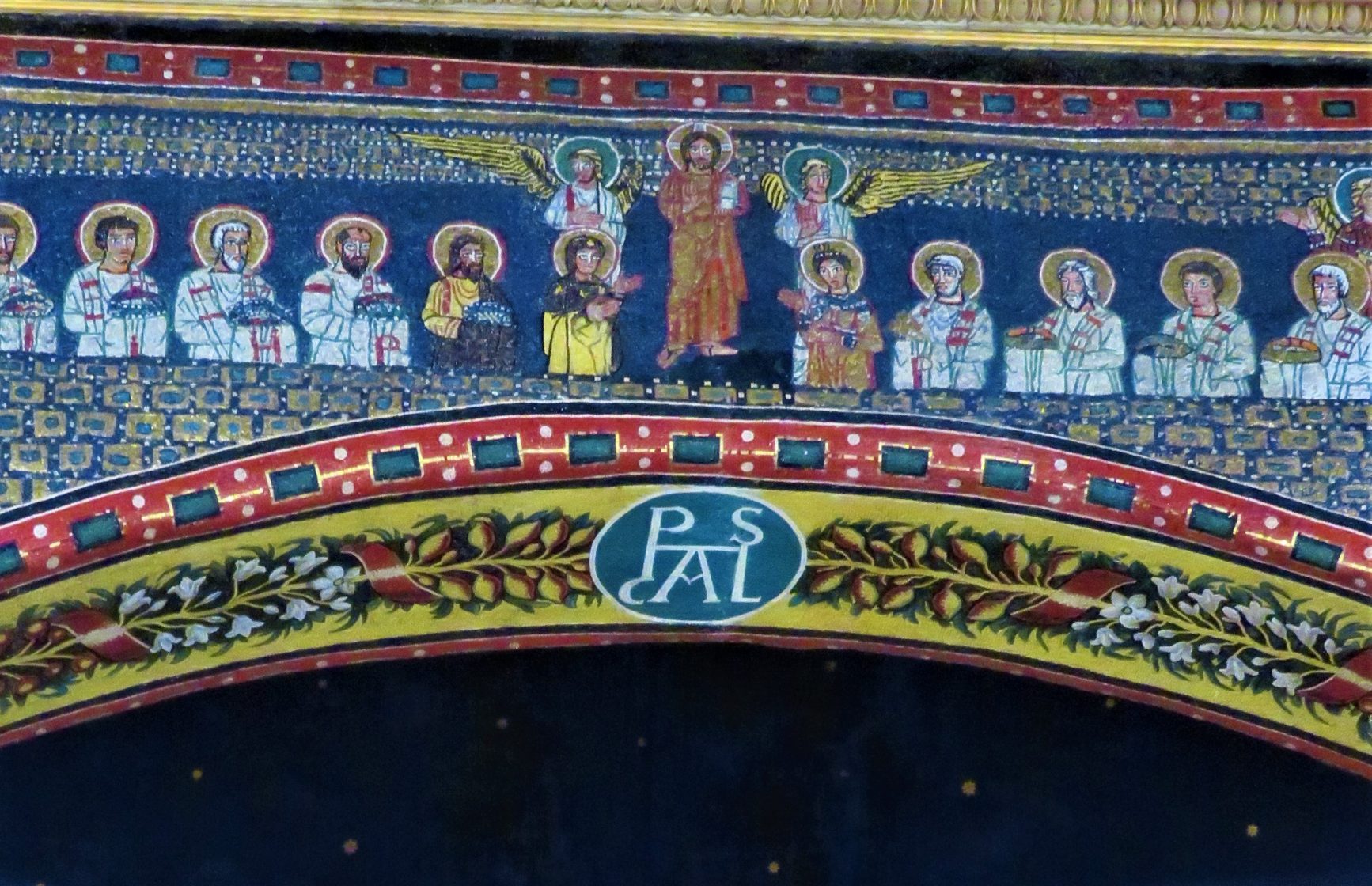 Leaving Santa Pudenziana, we will walk to the neighboring church of Santa Prassede.  (Saint Praxede was allegedly Pudenziana’s sister.)  Renovator Pope Paschal had the old church of Santa Prassede demolished and the current one built in its place in circa 820 A.D.  (Ok, 820 A.D. is a little later than “early Christian,” but the church and its mosaics are still 1200 years old!)  With Rockefeller-like munificence, Pope Paschal donated the funds to embellish the apse and its inner and outer triumphal arches with scenes from the Apocalypse.  And his monogram flashes white on blue, just below the Lamb of God.

A big spender, Pope Paschal also had a side chapel built and decorated for his mother, Theodora.  Her chapel is unique in Rome–although it can be compared to several mausolea and monuments in Ravenna.  Stepping into it, you find yourself in a sea of golden rays.  From a hidden window, light clatters into the chapel and reverberates around it, thanks to its gold mosaics.  This chapel is a prime example of how artists used light to heighten the beauty of their work and strengthen its spiritual significance. 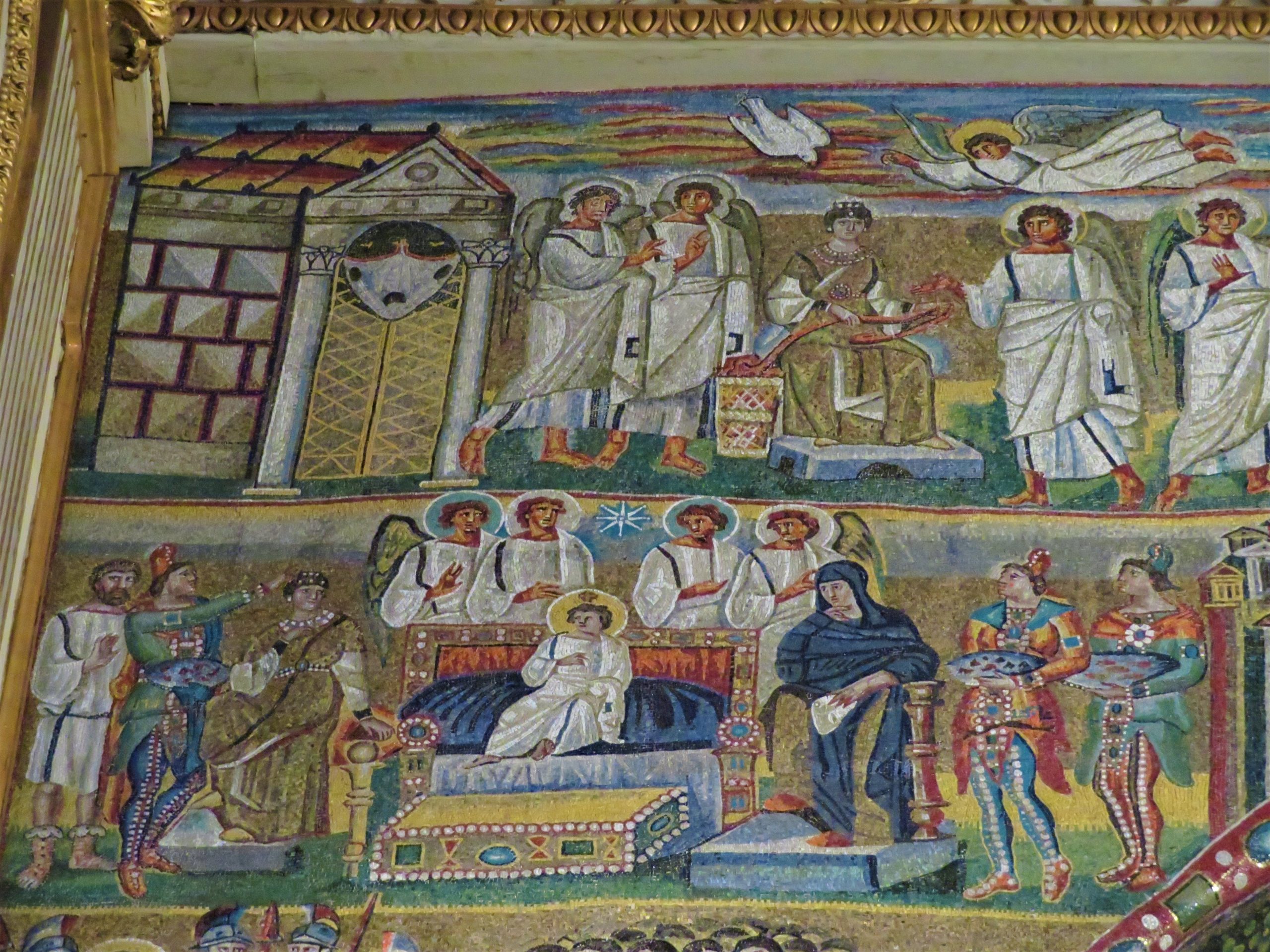 Next door to Santa Prassede is the mammoth Basilica of Santa Maria Maggiore (Bigger Saint Mary).  When the church was built and decorated for the first time in the early 400s, its patron Pope Sixtus III had several concerns.  One of them was the Nestorian heresy that insisted that Mary was the Mother of Christ but not the Mother of God.

Pope Sixtus III’s battle with the Nestorian heresy explains several unusual mosaics depicting the Life of Christ.  For example, the traditional manger scene is absent, because its humility strengthened Nestorians’ argument that Christ was merely human.  To hammer on Christ’s divine nature, Pope Sixtus III’s artists depicted the baby Christ like an Emperor in a jewel-studded throne in the Adoration of the Magi.  But the real must-see is Mary knitting in the Annunciation! This image was inspired by a book of the Bible that was expunged shortly after the mosaics were created.  Both Christ receiving the Magi in his imperial throne and the knitting Madonna can be seen in the picture.

We will conclude our exploration of early Christian church mosaics in Rome with the apse, decorated by Giacopo Torriti in circa 1295.  He signs his art with a bold autograph: pictor (literally “painter.”)  It’s in the bottom left-hand corner of the picture, in white letters on a greenish background.  Since the church is dedicated to the Virgin Mary, Torriti’s work features both her Assumption and Coronation.  His mosaic contrasts with a similar, but older mosaic in the Church Santa Maria in Trastevere in Rome. It says a lot about the church, its patrons, and its politics.  (Santa Maria in Trastevere is part of my Trastevere in the Middle Ages stroll–and it can always be paired up with the churches in this itinerary!) 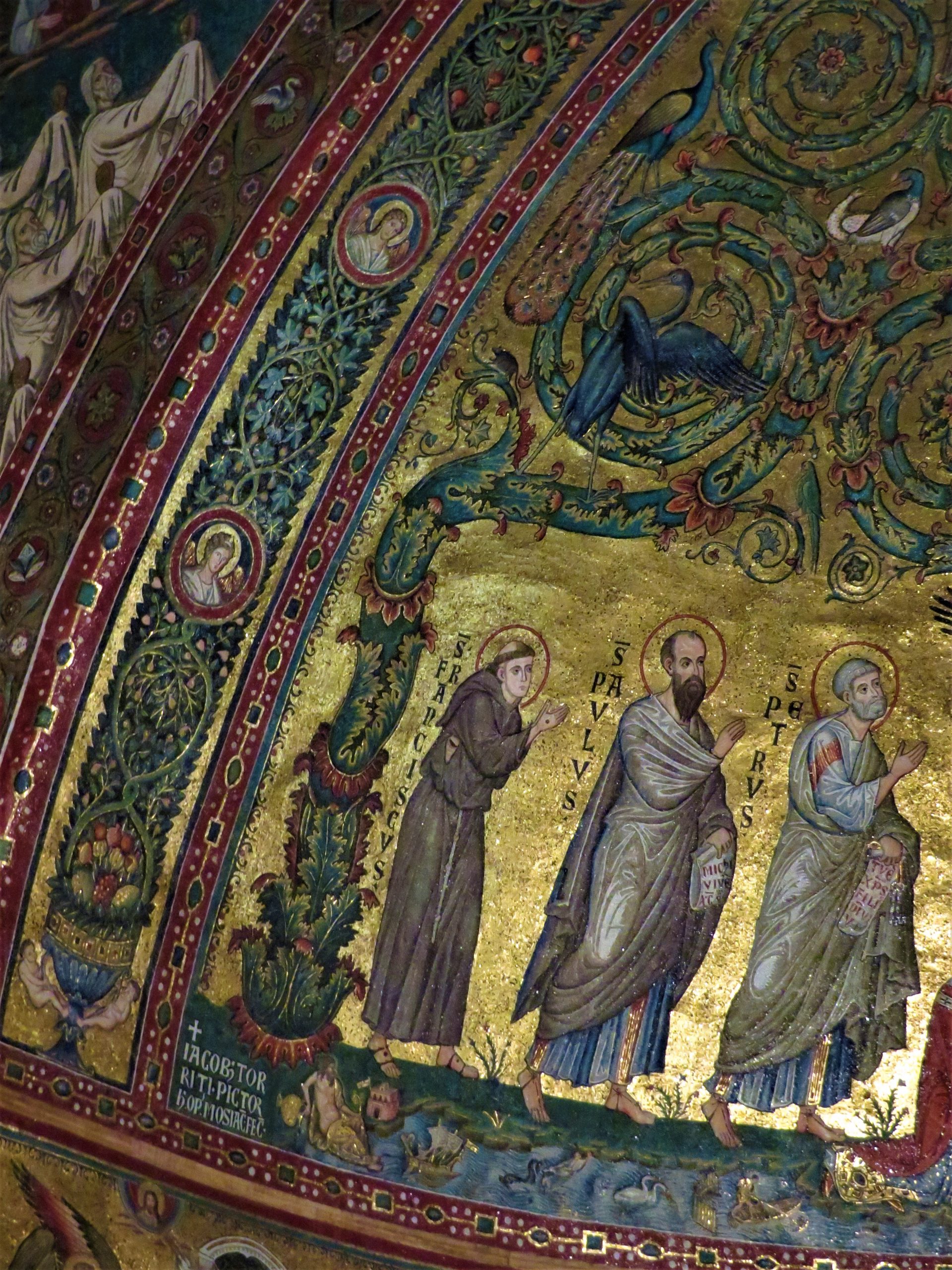