The Villa Farnesina: A Millionaire’s Mini-Mansion

Our story starts with Agostino Chigi.  Born in 1466 to a Sienese banking family, he launched his precocious banking career in Rome, quickly earning a fortune through intelligent investment strategies in the world of high finance.  Known as il Magnifico, he was the richest man in Christendom during the reigns of Pope Alexander VI (Borgia), Pope Julius II (della Rovere), and Leo X (Medici).  He reached the pinnacle of success, however, at a great cost to his health.  Indeed, when Chigi turned forty, his private physician hinted ominously that he had to slow down “or else…”

Following his doctor’s advice, Chigi bought land in what was then open countryside, where he could build a get-away.  Removed from the clamor and the tensions of the city, he still wasn’t far from the call of duty.  In those days, the “countryside” surrounding Rome’s miniscule center, included land along the western bank of the Tiber where, 2000 years earlier, patrician Romans built their vacation homes.  Cicero wrote about wanting to buy a villa in this area. Catullus’ infamous lover, Clodia, owned luxury property here.  And it had to be top-notch real-estate if the Emperor Augustus’ daughter, Julia, had a home here…

Since Renaissance aristocracy delighted in copying antiquity, il Magnifico situated his villa where ancient nobles passed their summers.  Moreover, he hired the famous architect, Baldassarre Peruzzi, to design his villa in the style of Emperor Nero’s Golden Home, which at that time had just been rediscovered.  (Peruzzi’s “retro” architectural vision was so radical that it would continue to revolutionize trends in summer homes and palaces for the next two centuries!) Artists were then employed to revive classical Roman themes in audacious full-scale frescoes.  Gods and goddesses frolic ubiquitous; an entire loggia is dedicated to the story of Cupid and Psyche; mythology is flaunted in high style.  In Chigi’s gardens, ancient statuary lined flower-strewn walkways.  An impromptu theater was set up for viewing plays by ancient comedians like Plautus and Terrence.  Chigi’s Villa was a hymn to classical otium, healthy leisure.

After Chigi’s death, his summer home was sold to the aristocratic Farnese family, who lived in the Palazzo Farnese on the opposite bank of the Tiber.  Chigi’s estate was subsequently given the nickname la Farnesina (literally, “the little Farnese palace”) to distinguish it from the Farnese family’s primary residence.  The name stuck even after the property was sold and eventually fell into disrepair. 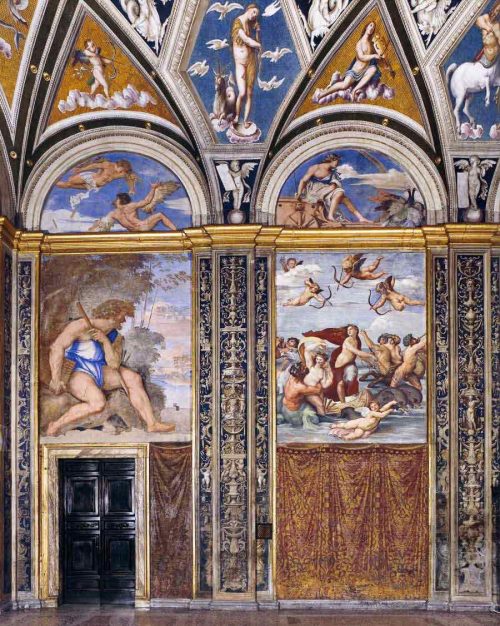 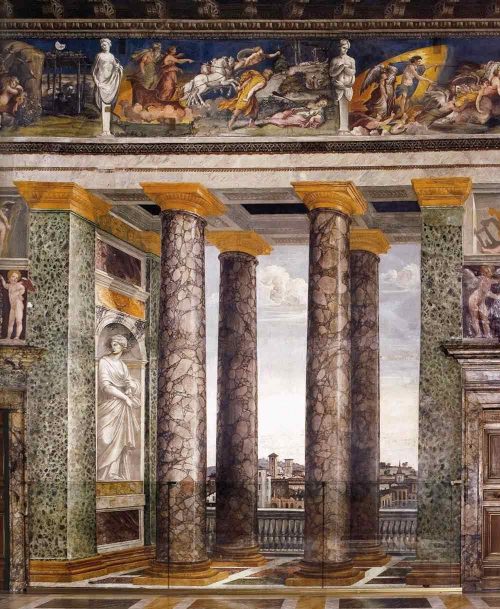 Luckily, in the late 1800s, the State bought the property and invested in lengthy restorations.  When the Farnesina was finally opened to the public in the 1900s, visitors were amazed by what they saw.  The Farnesina not only boasted fine art and architecture by Peruzzi, it also contained Raphael’s sea-nymph Galatea, harmonious frescoes by Sodoma (one of Raphael’s boisterous retinue), a ribald frescoed ceiling designed by Raphael and executed by Francesco Penni, Giulio Romano, and Giovanni da Udine (Raphael’s close associates), and early works by Sebastiano del Piombo (renowned as one of Michelangelo’s few disciples and friends).  This is one of the few places in Rome where so many great names can be observed so closely and in relative tranquility. 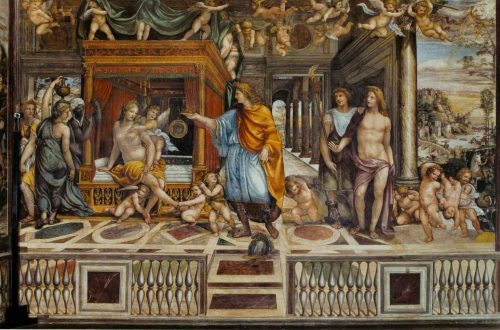 During a visit that usually lasts a little less than 3 hours, we cover Chigi’s life in detail, discussing his financial success, his philanthropy, and his exuberant family life.  After that, we examine the architectural style that inspired his home and other great villas to come.  Then we step inside, appreciating some of the most outrageously personalized Renaissance art still visible in Rome.  With a little time, patience, and imagination, the halls of the summer home slowly come alive with courtiers, languid poets, fine musicians, and an intrepid cardinal or two.  And if we are lucky, Chigi’s spirit, still wearing its bunny slippers and savoring a glass of white wine, will accompany us through his dream home’s rooms.