The Ancient City of Ostia Antica


Why do a rushed day-trip to Pompeii, when the splendid ruins of the ancient city Ostia Antica are just a 20-minute train-ride away?

Just like its Neapolitan counterparts (i.e. Pompeii and Herculaneum), Ostia is an ancient city. It enjoyed hundreds of years of prosperity as a naval base and then an import harbor. Unlike its Neapolitan counterparts, it did not perish overnight in the destructive wake of a volcano. Ostia simply followed Rome’s downward economic trajectory in the 400s A.D. Situated between the Mediterranean Sea and the Tiber River, it eventually lost its importance and slowly silted in.

But Ostia’s vacation-town and working-class spirit is unbroken!  After excavations in the early 1900s, Ostia still feels like a living, thriving city, with its warehouses, theaters, baths, apartment buildings, temples, villas, restaurants, bars and cafes! For example, in the photo, you’ll see a road lined with buildings, one of which was once a hotel, the other a cafe. 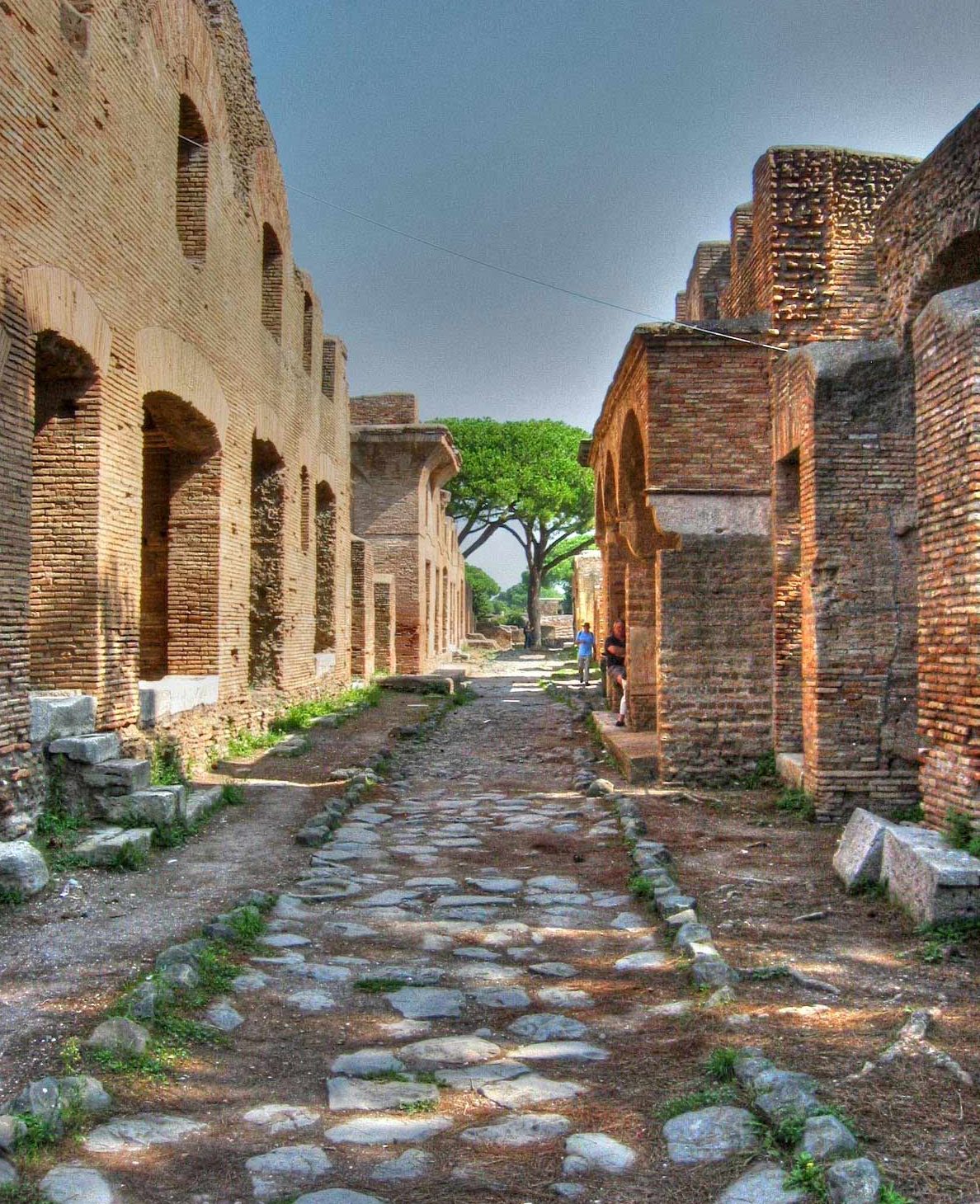 What You’ll Discover as We Stroll through Town


We’ll walk into town on the Via Ostiense, Ostia Road. It’s the same road that ancient travelers, businessmen, vacationers and residents used when coming from Rome.  We’ll poke our heads into the tombs that line the ancient highway — when we’re not avoiding speeding horse-drawn wagons heaped with foreign goods and imports, heading to the markets in Rome!

We’ll step out of the ancient traffic and into a public piazza. After that, we’ll head down the Decumanus, the city’s main drag.  It’s possible that we’ll bump into some ancient drunken sailors on shore leave. We’ll definitely peek into a temple or two, and stop in at several eateries. At one highbrow cafe, we’ll find senators and magistrates attending business lunches. At a greasy spoon, locals consume their fried chickpea patties while gulping down local white wine. Ancient vacationers play dice, while the waitress brings them another plate full of green olives. The ancient city’s energy is so powerful, that you’ll feel the ghosts of the inhabitants going about their business.


At a well-preserved public bath (or spa), we’ll discuss ancient hygiene and Romans’ propensity as plumbers.  Nearby, a forica or public restroom has survived nearly intact.  It and its continuous marble seat can be seen in the photo.  Our walk will also take us through residential districts.  We peek into well-built tenements for dockworkers and sailors, and visit high-end homes, which were well-appointed with frescoes and marble “wallpaper.”  But how could we skip the theater, where we’ll talk about Roman entertainment.  In a second photo, the seats of Ostia’s theater are seen yawning over its stage. 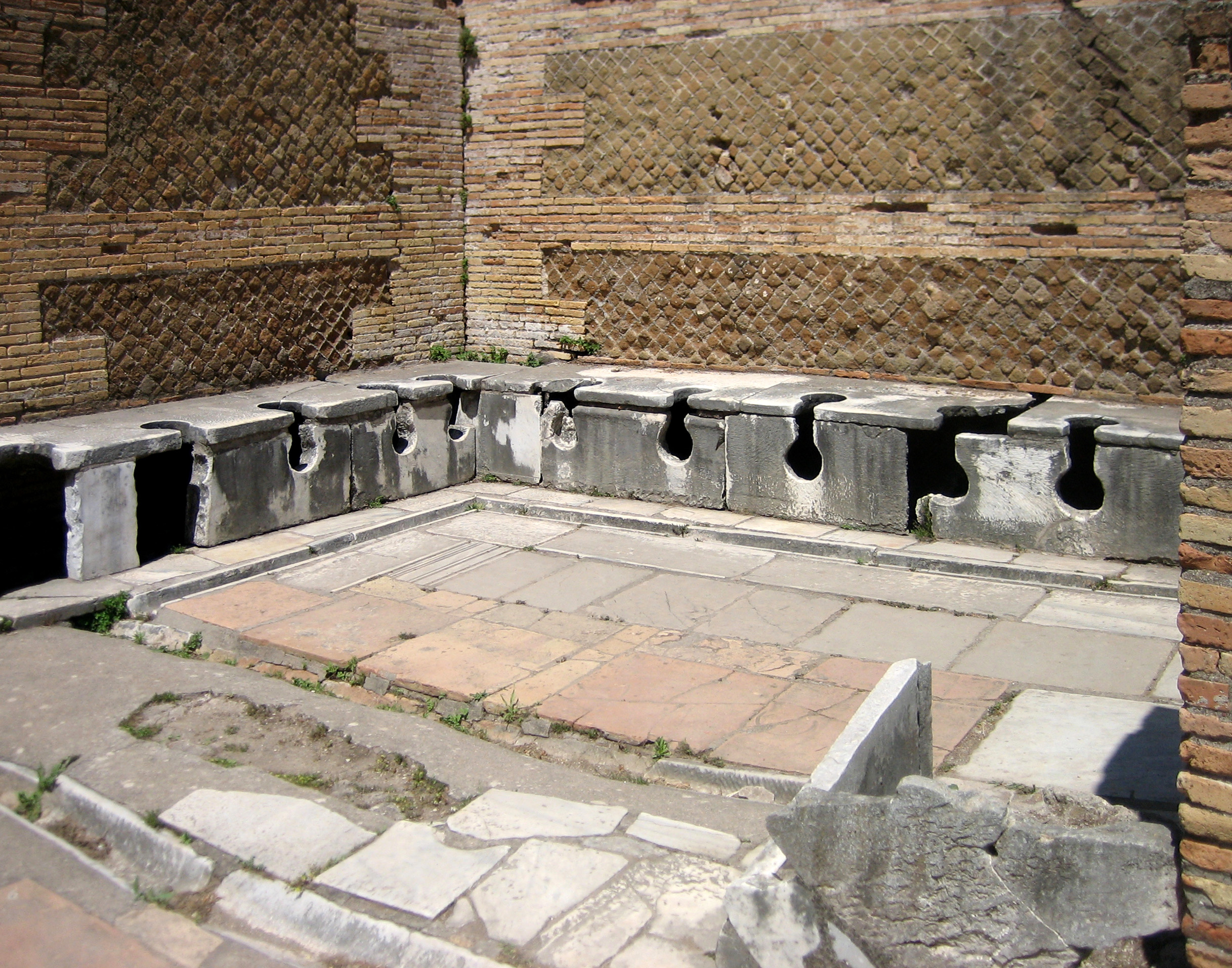 
Due to its size, Ostia is a long half-day or full-day excursion.  If visitors want to stop for lunch, there is a well-stocked cafeteria conveniently located in the middle of the archeological area.  Those who prefer a picnic are encourage to pack one.