Roma Barocca: Bernini and Borromini on the Quirinal Hill Starts With Imperial Rome!

Perhaps unexpectedly, our Roma Barocca stroll starts with imperial Rome, not Bernini and Borromini!  The Quirinal Hill was a residential district during the empire and was therefore fit out with all the infrastructure that Romans needed to live decently.  As we discuss the Quirinal’s history at our meeting point in Piazza del Quirinale, two ancient Roman statues will overshadow us.  Representing Castor and Pollux, they originally decorated the monumental public baths that Emperor Constantine bestowed on the neighborhood.  One of them can be seen in the picture here.

After several devastating invasions in the 5th and 6th centuries A.D., the Quirinal Hill, its apartment buildings, public baths, and senatorial villas were slowly abandoned.  During one of those invasions (in 537 A.D.), Goth enemies destroyed the aqueducts that furnished Rome with water.  At that point, the Quirinal, Rome’s tallest hill, was left high and dry.  Without water, the area lost its appeal.  Until the mid-1500s!  At that point, astute Cardinal Felice Peretti invested in cheap real with the idea of constructing a villa on the deserted hill. 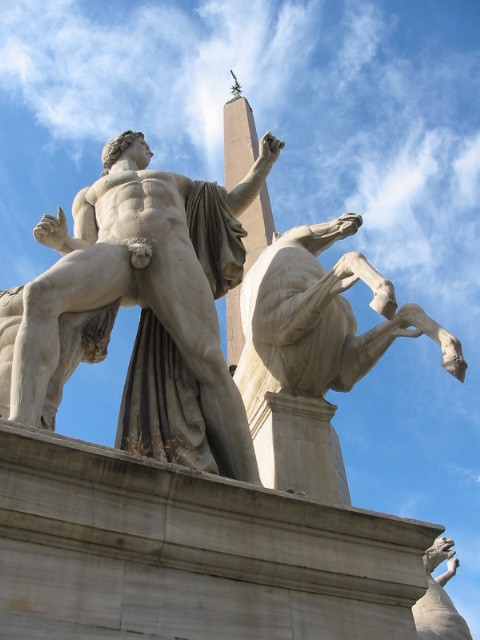 Elected Pope Sixtus V shortly after that, he had an ancient Roman aqueduct restored to irrigate his villa and the neighborhood around it.  The aqueduct’s name? Acquedotto Felice, which sounds like “the happy aqueduct” Italian.  But it is actually named after him.  (Remember, he was called Felice Peretti.)  Three fountains were then built along the ridge of the Quirinal Hill.  The first is the magnificent Dioscuri Fountain in Piazza del Quirinale (where we meet).  The second is the mediocre Quattro Fontane.  The third is the Moses Fountain.  Of course, we’ll discuss all three.  Besides the fountains, Pope Sixtus V commissioned myriad public works.  And he “tagged” them all with his family insignia, a lion with pears or pear trees.  After all, Peretti means “little pear tree” in Italian!

The presence of water revitalized the Quirinal Hill.  Many religious orders built new churches and monasteries there.  The first one we’ll visit is Santa Maria della Vittoria (Saint Mary of the Victory).  The Carmelites refurbished it in honor of a Catholic victory over Protestant aggressors.  (Oh, that’s right!  This is the moment when the Reformation and Counter-Reformation are violently duking it out!)  Not only is the church a Baroque gem in itself, it also boasts the pinnacle of Roma Barocca statuary, Bernini’s Ecstasy of Saint Teresa.  It merits lots of discussion and can be seen in the photo here. 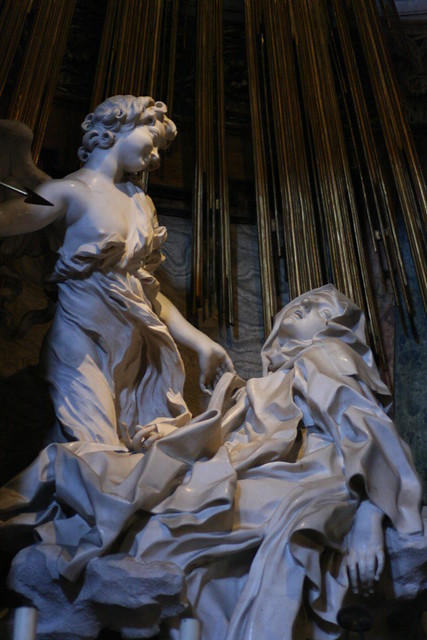 Baroque Rome is Borromini too! 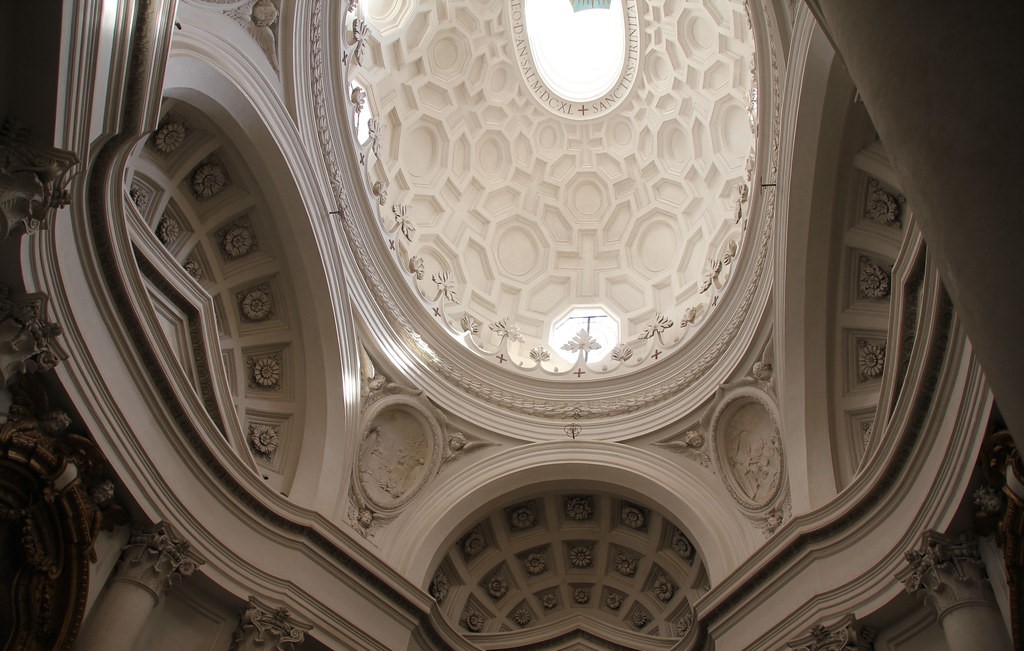 Nearby is Borromini’s masterpiece, the cozy Church of San Carlo (Saint Charles).  It was so small that locals nicknamed it San Carlino (little Saint Charles).  Young, devote, and eager to create a CV, Architect Borromini offered his services free of charge to the poor religious order of the Discalced Trinitarians.  The fact that the church was dedicated to the Counter Reformation hero, Charles (Carlo) Borromeo, may also explain Borromini’s generosity.  After all, he was one of Borromini’s role models.  Stark yet joyful, the church is a gem that expresses Borromini’s and the Trinitarians’ personal feelings about the Divine.  We’ll pay special attention to the church’s hidden geometry that heightens our emotions and controls our gaze.  Its unorthodox cupola can be see in the photo.

Years later, as if he sought to extinguish the simply glory of Borromini’s San Carlo on the Quirinal Hill, Bernini designed and constructed the lavish Church of Sant’Andrea for the Jesuits.  The church reflects the power, prestige, and wealth the order enjoyed in the 1600s.  Interestingly, Bernini was faced with some of the same spatial challenges as Borromini at San Carlo.  But Bernini opted for different solutions, which we will weigh and discuss.

In his old age, Bernini, would sit in the church and admire his own work for hours. He claimed to enjoy the beams of natural light that became gold sunbursts when they hit the gilded dome.  And he apparently loved the light on the warm red marble lining of the walls.  Who said that one of the heroes of Roma Barocca was modest! 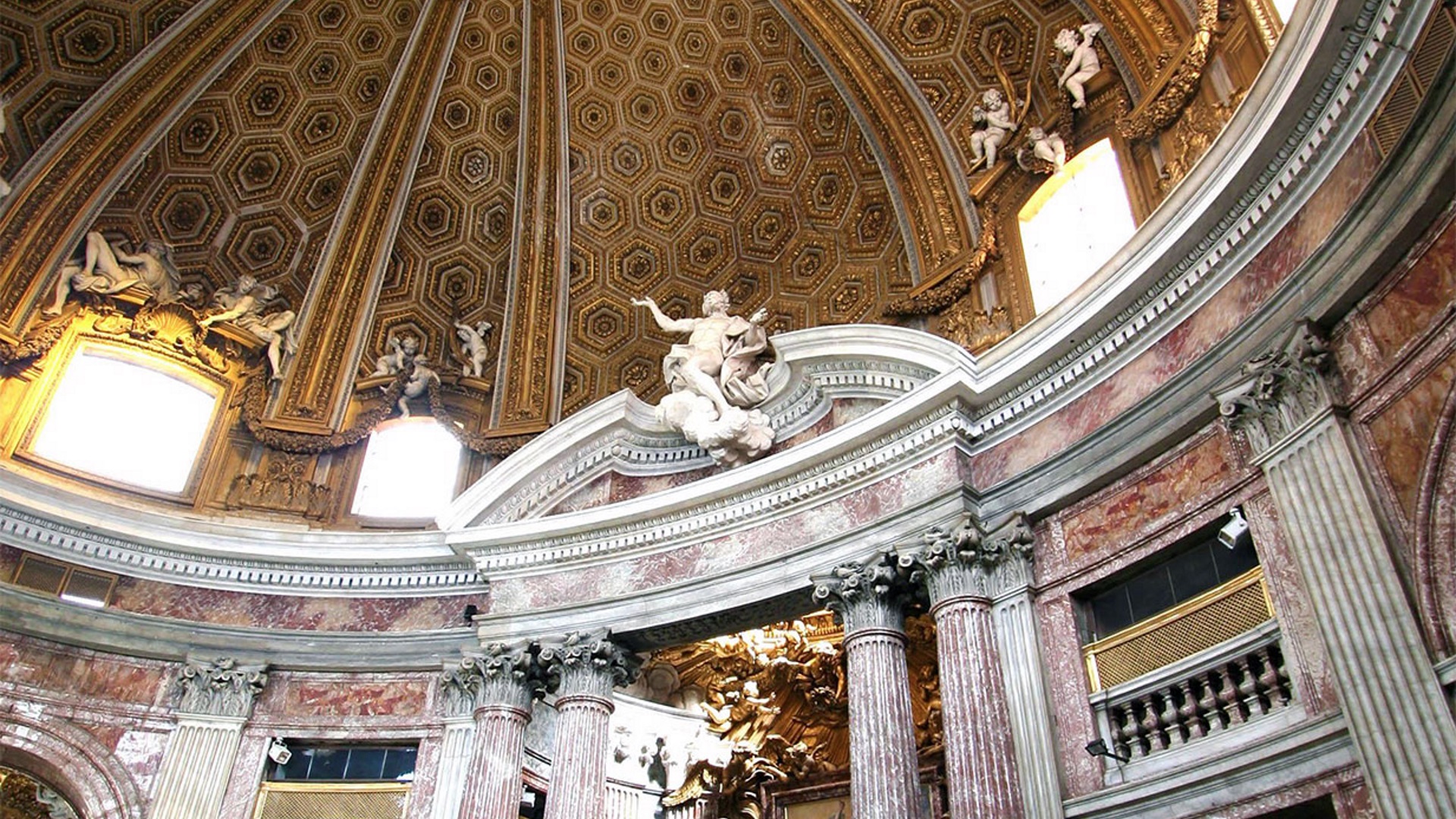 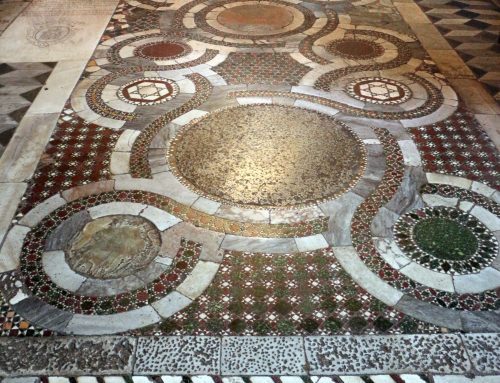