Buckle your seat-belts!  We’re going back to 800 B.C., approximately 50 years before Rome’s foundation to discuss a natural inlet, just downstream from Tiber Island.  It served as a harbor and it teemed with Greek and Phoenician traders who, for hundreds of years, had dominated the Mediterranean and its commercial routes.  As we discuss the foreign influences that shaped the embryonic city of Rome, we consider several passages of literature: Virgil’s description of Greek Hercules’ arrival on the banks of the Tiber; the settlement inaugurated by the psychic, Carmenta, and her whiny Greek son, Evander; and the arrival of Bacchus’ mother from the east, tormented by the goddess Hera.  The foreigners that populate these stories flocked to the banks of the Tiber from abroad or accidentally washed up in its boat-friendly bay.  Rome is not as Roman as most people think! 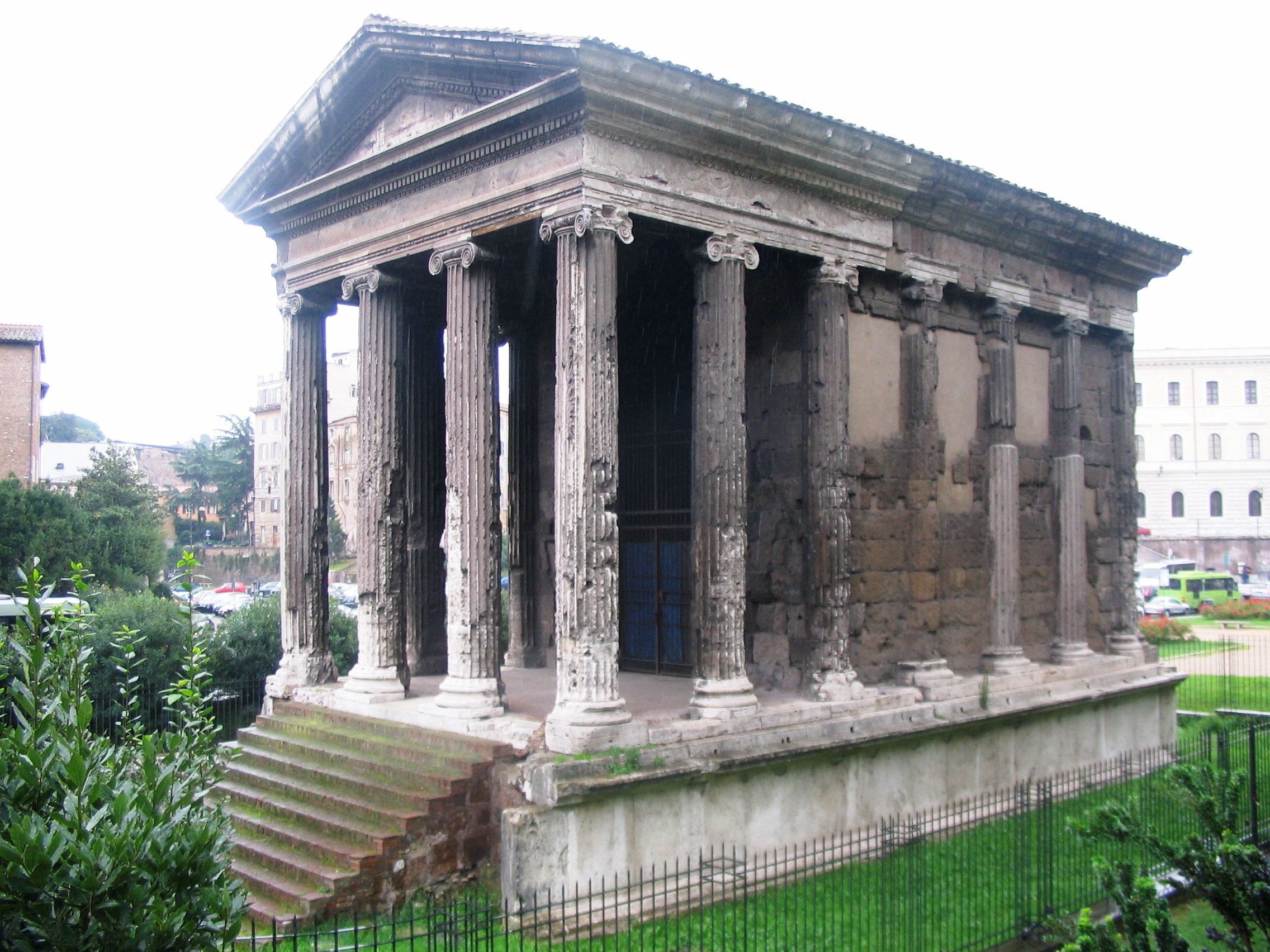 The natural harbor was used for centuries until it and the neighborhood around it underwent a series of changes.  From 600 BC on, the area a commercial district, drawing large crowds.  Soon, the riverside was one long marketplace: the Forum Boarium (the Cattle Market), the Forum Holitorium (the Vegetable Market) and the Forum Piscatorium (the Fish Vendors) flanked one another and thrived.  After hunting down the remnants of these markets, we will admire multiple temples that still line the riverside—a small boardwalk of sanctuaries.  Further downstream, we will appreciate a temple erected by a wealthy merchant and dedicated to Hercules (although it is often wrongly referred to as the Temple of Vesta).  Originally noted for being the second temple in the city erected and decorated with Grecian marble, it is now the oldest existing marble temple standing in Rome.

Although the markets fed the city up to the Republic, they were eventually dwarfed by the metropolis’ growing needs.  To avoid famine, corruption, and riots, local administrators decided to dismantle the old harbor and build a modern port with a sophisticated system of docks in the undeveloped plain just downstream, where the neighborhood Testaccio now stands.  Big businesses relocated to the modern port and took advantage of grandiose new emporium, silos, warehouses and storage spaces. 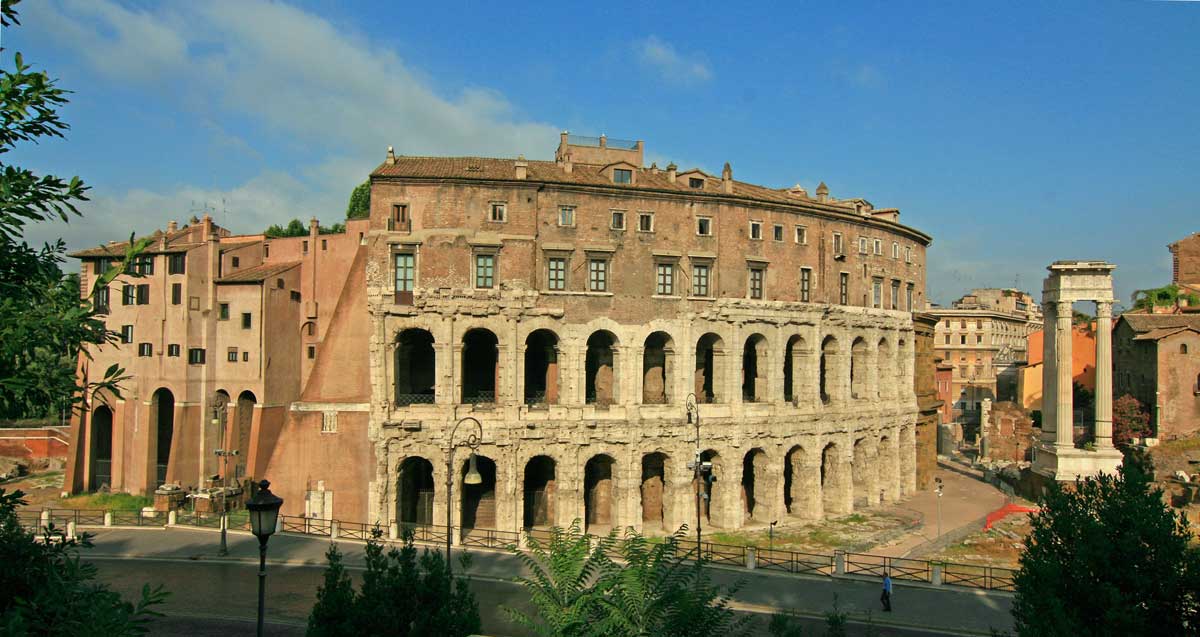 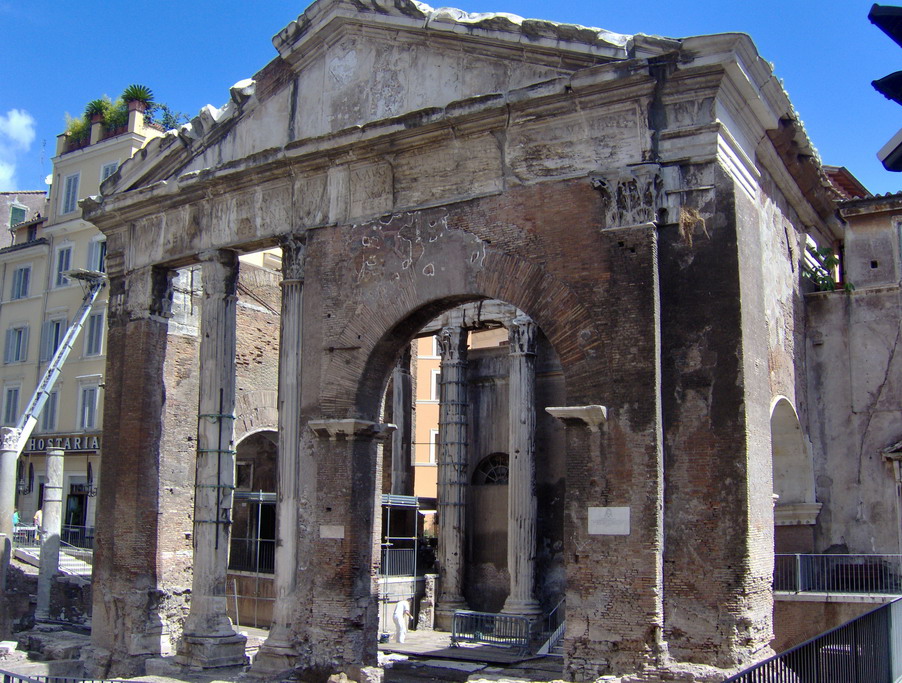 The old markets downsized.  Aunt Julia could still buy a bundle of chicory and a dozen eggs when the need arose… but the old harbor district slowly became more and more residential.  Toward the end of the Republic, Julius Caesar found it a suitable location for his theater, now known as the Theater of Marcellus (seen above).  Nearby is another archeological gem, a portico, reconstructed by Julius Caesar’s adopted son, Octavian or his sister, Octavia.  Standing to the side of his adopted father’s theater, it once surrounded two venerable Republican temples.  The temples and most of the portico have disappeared.  One magnificent central entrance remains (seen on the left), waiting to be studied and admired.