Why Tour the Temple of Firstborn Fortune in Praeneste (i.e. Modern-day Palestrina)?

Take a tour of the Temple of Firstborn Fortune in Palestrina because you’ve never heard of it!  And you’ll learn how Goddess Fortune had great appeal in antiquity.  After all, she was a talisman in a world that was full of uncertainties.

Fortune-worship was ubiquitous.  She was Fortuna in and around Rome, Tyche or Eutyche in the Greek world, and comparable to Isis in Egypt.  Ancient sculptors crafted her holding a cornucopia, proving that she was a bountiful goddess on a good day.  But statues of capricious Fortune tread on men.  Fortune was at times “Firstborn,” because she was the primordial chaos in which all things were possible.  And from her creative chaos came order, structure, and civilization, which her children Jupiter and Juno represented.  The ancient sculpture seen here shows her with her son Jupiter.

Despite her importance, very few modern scholars give her the attention she deserves.  And guides rarely mention that her temples stood (and still stand in some cases) in and near Rome.  But the maximum expression of ancient Fortune-worship is now in the town of Palestrina (about 45 kilometers/27 miles from Rome). 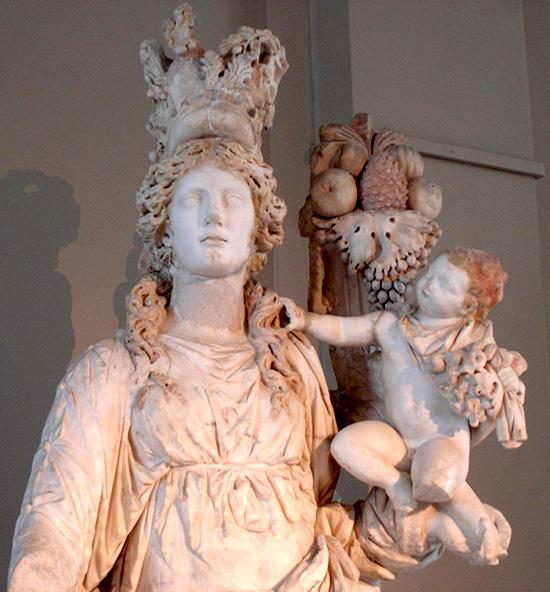 As luck would have it (so to speak), many of her temples housed oracles.  And the oracle at the Temple of Fortune in Palestrina was renown throughout the Mediterranean world.  That alone might inspire you to take a trip to Palestrina.  But if it doesn’t, let me tell you more about the mammoth ruin of her end-of-the-second-century B.C. temple…

To give you some context, let’s contrast the Temple of Fortune with the Temple of Apollo in Didyma, Asia Minor (now Didim, Turkey).  During Persian occupation of Didyma, the original Temple of Apollo was damaged.  In circa 330 B.C., locals began rebuilding it.  Their intent was to build the largest temple they could.  And it came in third place, after the Temple of Diana at Ephesus and the Temple of Hera on the Island of Samos.  Over one hundred years later, construction workers had finished the project.  Well, they had finished the inner sanctum.  In Emperor Hadrian’s reign (circa 120 A.D.), later generations of construction workers were still erecting the columns of the outer porticoes.  And when Emperor Theodosius suppressed freedom of worship in favor of Christianity in 394 A.D., the temple was still unfinished.  The photo shows about half of the temple’s front porch. 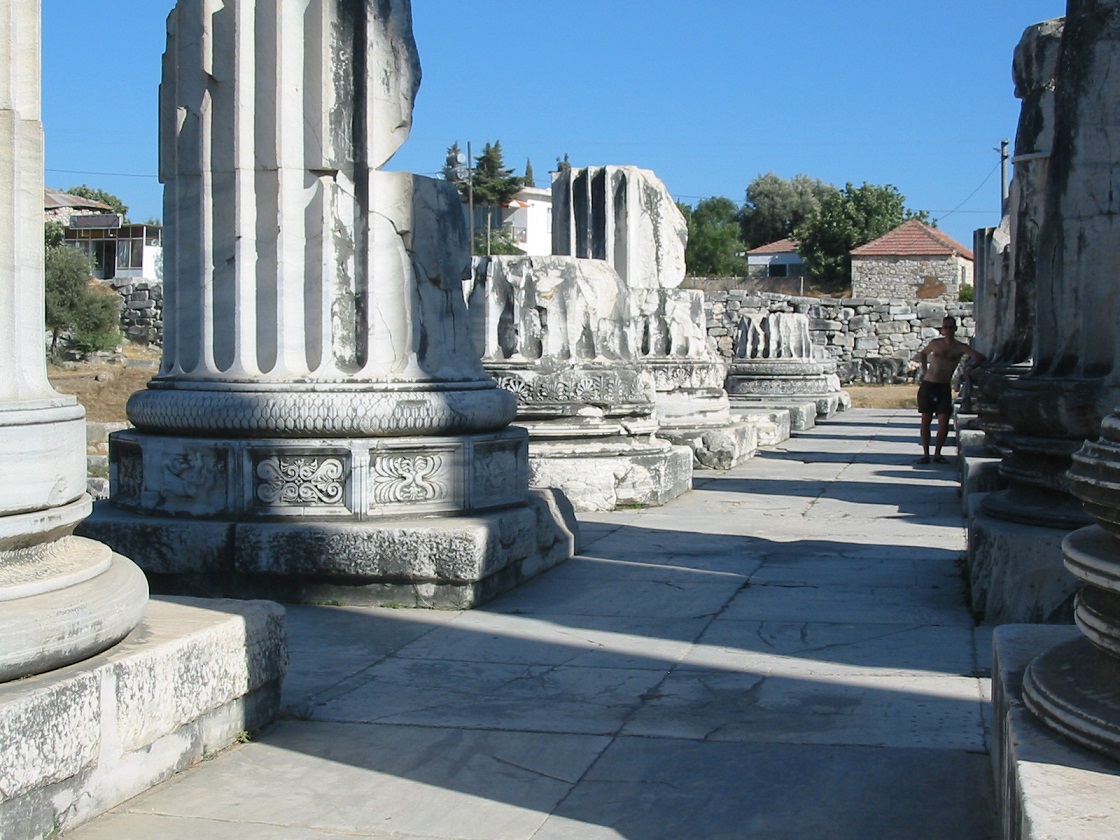 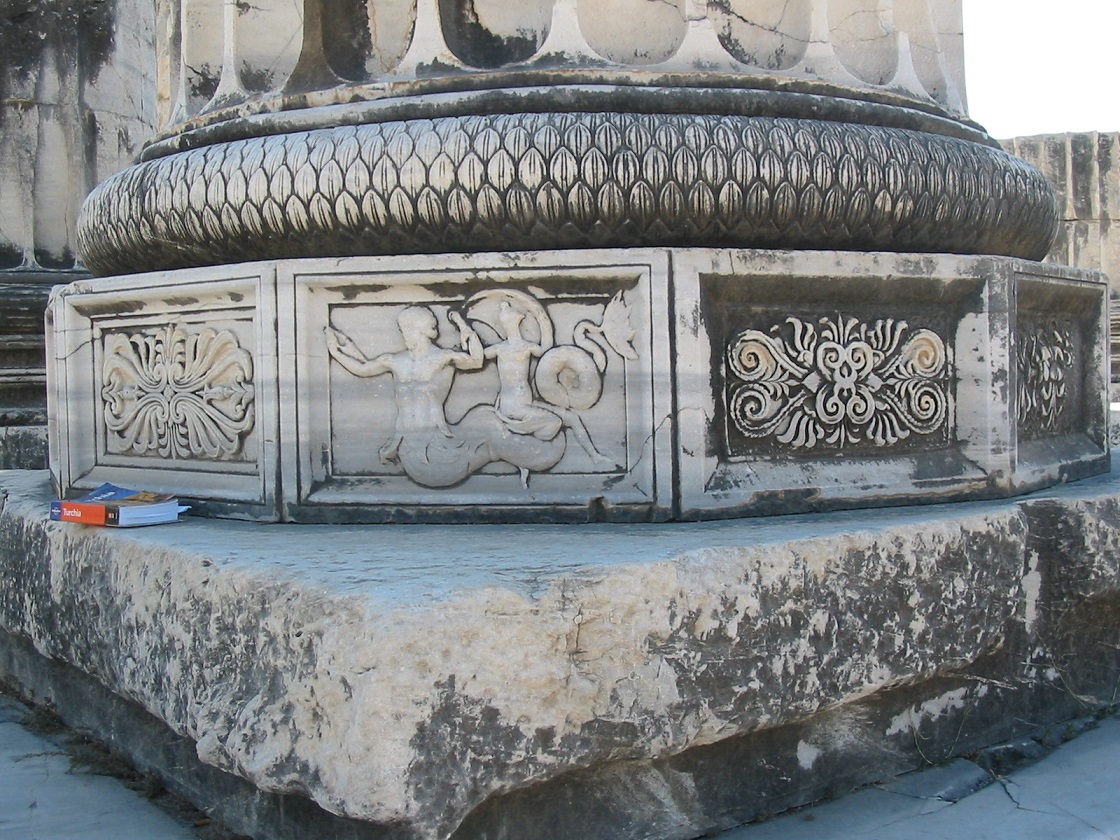 So, most Medieval construction crews worked faster on the great cathedrals of Europe!  Yeah.  But cut ancient Greek construction workers some slack.  They built with solid marble.  And each block was cut to occupy a specific spot.  Building the temple of Apollo was labor intensive.  And each artisan had to possess absolute mastery of his craft.  When you visit the Temple of Apollo, you’ll discover that a double row of Ionic columns was supposed to surround the temple.  Each column was a hair shy of 20-meters tall.  Then calculate two rows of 10 columns along the short sides and two rows of 21 columns on the long sides.  That’s 62 gigantic, hand-tooled, decorated marble columns.  I don’t know if the size and decoration of the column base in the photo will impress you.  But the Turkey guidebook to the left is for scale…

While scholars do not agree on the exact amount of time it took to build the Temple of Fortune in Praeneste (modern-day Palestrina), two decades is a conservative guestimate.  How on earth did its patrons have the marble temple finished in 20 years, over two thousand years ago?  They didn’t.  Their construction crews used concrete.  This cheap and flexible building material was then given a plaster veneer.  And the plaster was burnished to look like marble.  In a certain sense, builders and patrons in Praeneste were pioneering faux marble technology.  Thanks to concrete and the discovery of “marbleizing,” locals in Praeneste whipped out their grandiose temple in record time.  Wanna hear me get emotional over ancient concrete?  Just watch the video!

If you know anything about local identity in Italy, most towns and cities have spent their entire histories (and local resources) struggling to prove that they’re better than anyone else in the immediate (and not-so immediate) area.  So, guess who earned bragging rights when they completed the Temple of Fortune “overnight”?

So, our tour of the Temple of Fortune will include discussion about the precocious and ambitious use of concrete.  But we’ll also talk about sacred architecture.  For example, how pilgrims and attendants navigated the temple.  And we’ll compare and contrast the temple with its oracle to others (like the Temple of Apollo in Didim).  Since Praeneste played a part in Marius and Sulla’s civil war, we may talk briefly about politics and conflict at the end of the Republic — and the impact they had on the temple.  (After all, that war ruined parts of the temple, which had only been finished decades before.)  Ancient and modern warfare played a role in the Temple’s history.  Had Palestrina not been bombarded in World War II, Medieval and Renaissance homes would still hide the temple from view! 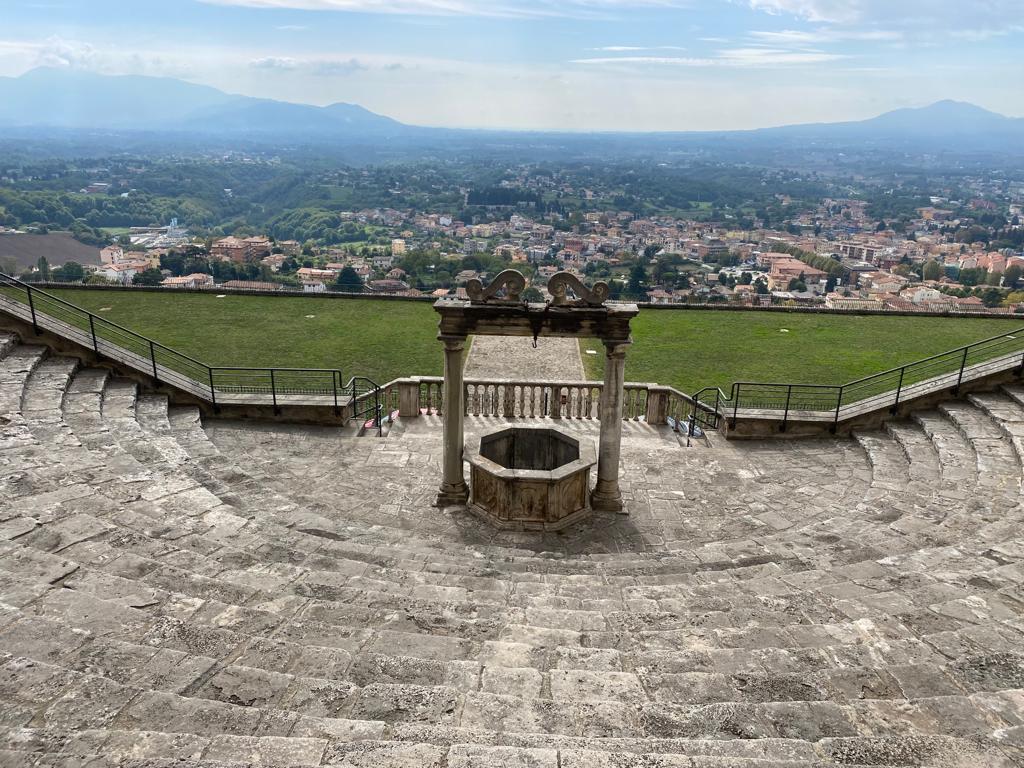 Suggestions for Visiting the Temple of Fortune in Modern-day Palestrina

If local traffic behaves, Palestrina and the Temple of Firstborn Fortune are roughly an hour’s drive from Rome.  Since the tour lasts a couple of hours, you may want to add Hadrian’s Villa and/or the Villa d’Este in Tivoli to your itinerary.  After all, the two towns are only a half-hour away from one another.  Combined, they constitute a perfect full-day.  Of course, there’s always time for a coffee and/or a snack… as the photo from the Temple of Fortune Cafe demonstrates!