Tour Trastevere in the Middle Ages!

A tour that focuses on Trastevere in the Middle Ages will surprise you. For example, while most of Rome wallowed in neglect, art survived and flourished in Trastevere. The aristocratic Stefaneschi family lived there, dominated local politics, and invested lavishly in their “hood.”  Under the family’s auspices, “their” churches were embellished by the most innovative artists available. The first on the list was Pietro Cavallini. “Who?” You ask. Well… You’ve probably heard of Giotto, who gets all the credit for propelling the Middle Ages toward the Renaissance. Pietro Cavallini was his contemporary, and there’s a lot of discussion about who learned what from whom! Next on the list is Arnolfo di Cambio, another name who deserves more credit than he receives. And then the so-called Cosmati family, who embroidered magnificent polychrome marble floors that look like tapestries. You’ll see a detail of one in the picture below.

We’ll start at the solitary church of San Giorgio in Velabro.  There, we’ll discuss the saint, the history of the church, and its art.  Although the apse fresco is badly damaged, it offers insight into the career of the artist, Pietro Cavallini and his Stefaneschi patrons. 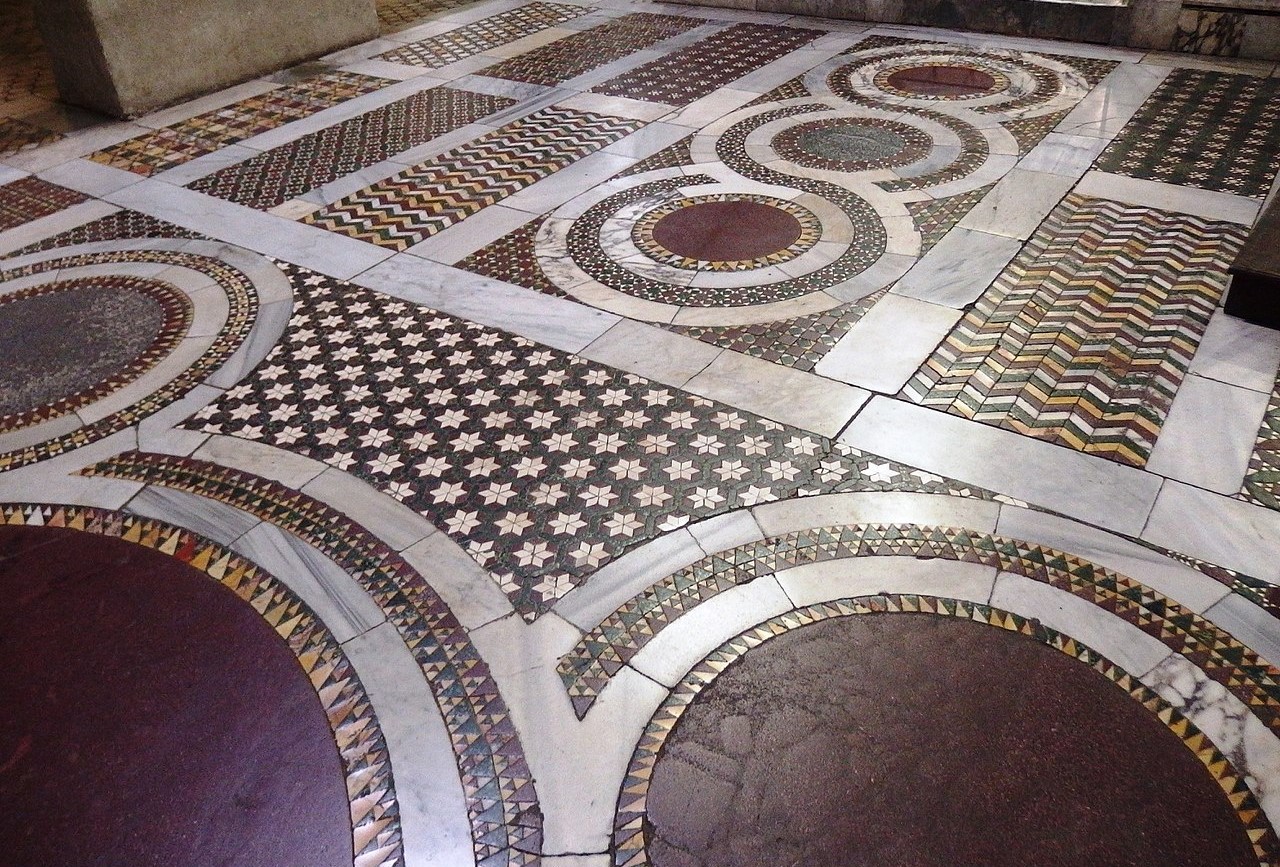 Next door to San Giorgio is Santa Maria in Cosmedin.  Untouched by later restorations, it is one of Rome’s most intact Medieval churches. So, its art and architecture still reflect the liturgical needs of the Middle Ages. Without a doubt, its untouched Cosmatesque pavement provides a marvelous opportunity to discuss its symbolism and local stone-cutting techniques. We’ll definitely recharge in the church’s quiet interior, but its crowded porch (outside) can be unnerving.  A manhole cover from an ancient Roman sewer, depicting Oceanus, the God of the Seas has been positioned here.  He has been dubbed the Bocca della Verita’ (the Mouth of Truth).  While legend has it that he was a medieval lie-detector, today he is undeniably one of the most famous photo ops in Rome!

Santa Cecilia and Santa Maria in Trastevere, The Apex of Innovation in Medieval Art

Crossing the Tiber, we’ll head to the early Christian Church of Santa Cecilia in Trastevere.  There, glittering early Medieval mosaics await us. Discussing them will prepare us for the even more grandiose medieval mosaics in the Church of Santa Maria. We’ll also focus on the baldacchino (canopy in Italian). It stands over the high altar and breaks with old trends from the Middle Ages. We’ll thank Arnolfo di Cambio for its innovative and spunky design. Finally, we’ll take the elevator to the second floor of the cloistered nuns’ residence. It gives us access to the choir, where we’ll admire Cavallini’s frescoes depicting the Last Judgment  Believe it or not, his masterpiece was built over and hidden from view in the late 1500s!  It was then forgotten… until it was unexpectedly rediscovered during long-needed restoration in the modern era! 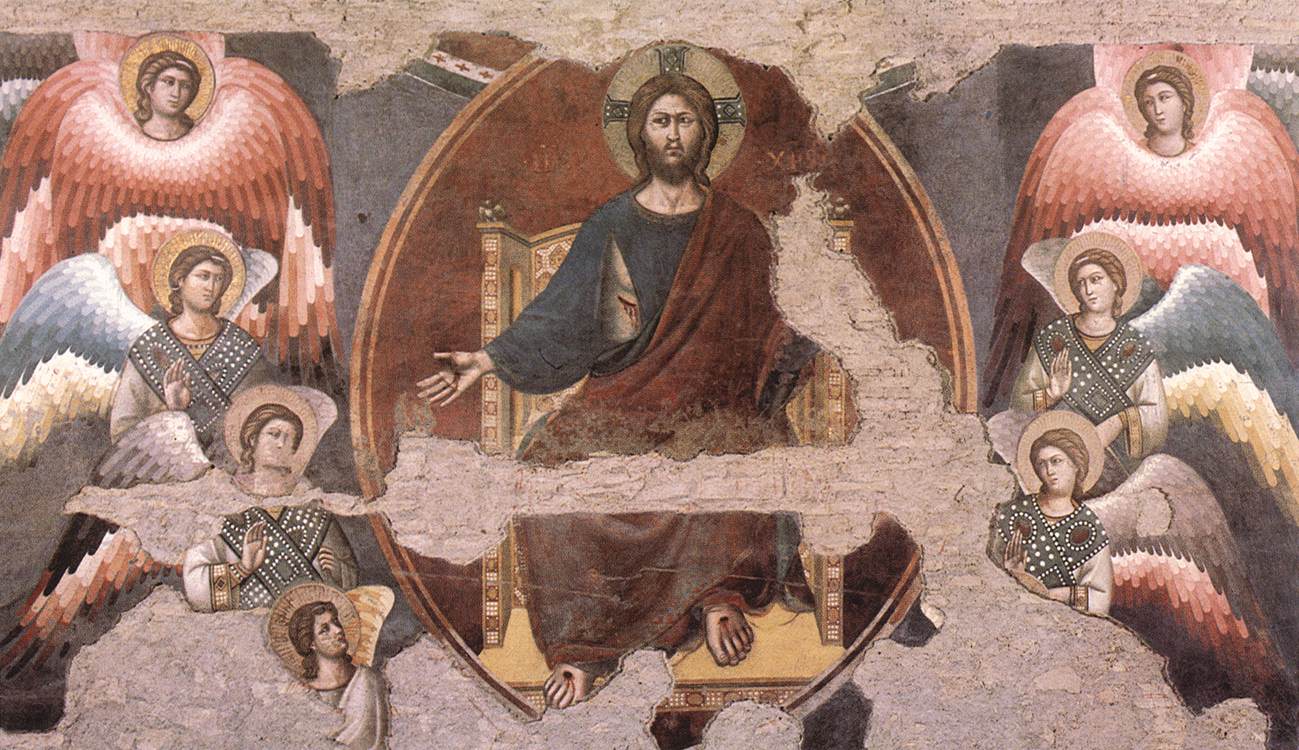 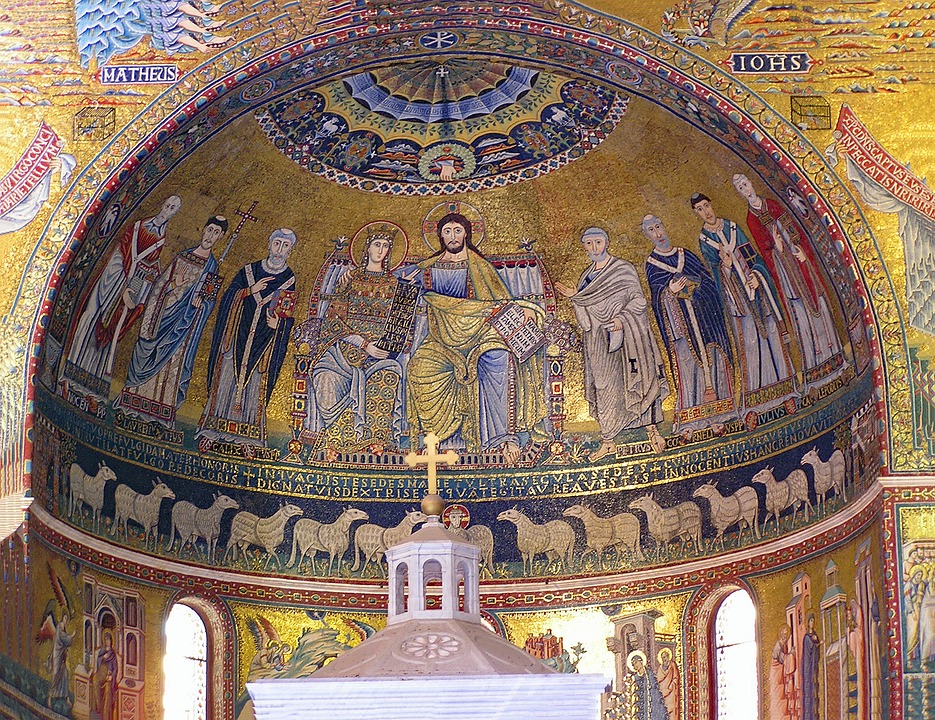 From there, we’ll stroll toward our next destination, the Church of Santa Maria in Trastevere. As we go, we’ll get a feel for the neighborhood where Cavallini spent much of his life creating frescoes and mosaics for his noble patrons. Then, we’ll get comfortable in Santa Maria and focus on its history and mosaics.

The oldest mosaics, in the apse, are by an anonymous artist and his assistants. They depict the Assumption and Coronation of the Virgin. Those mosaics can be seen in the photo. Completed in circa 1140 for Pope Innocent II, they subtly celebrate the Church’s victory over several recent heresies. Beneath the apse are instead six, masterful late-Medieval/early Renaissance mosaics composed by Cavallini. They illustrate scenes from the life of the Virgin Mary. Created for the Stefaneschi family in the 1290s, the innovative mosaics reveal Cavallini’s interest in a more realistic approach to art. He is clearly foreshadowing the full Renaissance to come!

Where To Go After The Middle Ages in Trastevere?

Daniella often defines Trastevere as the bohemian part of town. It’s full of cafes, eateries, romantic alleys, and people-filled piazzas.  It’s a great place to sip a prosecco and write postcards–providing that you can resist the urge to people-watch!  If you’re a photography buff, Trastevere will offer you picturesque themes to snap, like old palazzi’s doors and the occasional lazy cat on a moped.  The Janiculum looms above Trastevere and offers beautiful views over the city. Need ideas after visiting Trastevere in the Middle Ages?  Ask Daniella!