Part 1: I was Young, Married, and Foolish

I’ve always enjoyed walking and, in my late-twenties, I learned to love jogging.  Somewhere along the way I purchased a book called A Piedi nel Lazio (On foot in Latium). This is not an endorsement.  You’ll see why.  This is the beginning of a story.

A Piedi nel Lazio outlined a walk that went from downtown Rome to Ostia.  It stimulated many of my mental trigger points:

It was the 26th of December.  I don’t remember the year.  My ex-husband probably does.  We set out early.  So early that Rome was still wrapped in cold humidity.  The walk followed the bike path along the Tiber River—in the shadow of the circa twelve-meter-tall walls of the flood-controlling Muraglioni. I remember mist and a slight chill that some brisk walking would quickly alleviate.  The beginning was promising, just as A Piedi nel Lazio had described.  We followed the bike path as it snaked along the Tiber River southward and westward.  According to the map, after crossing a huge ring road about one-third of the way there, we would find a path that would take us more or less directly to Ostia. 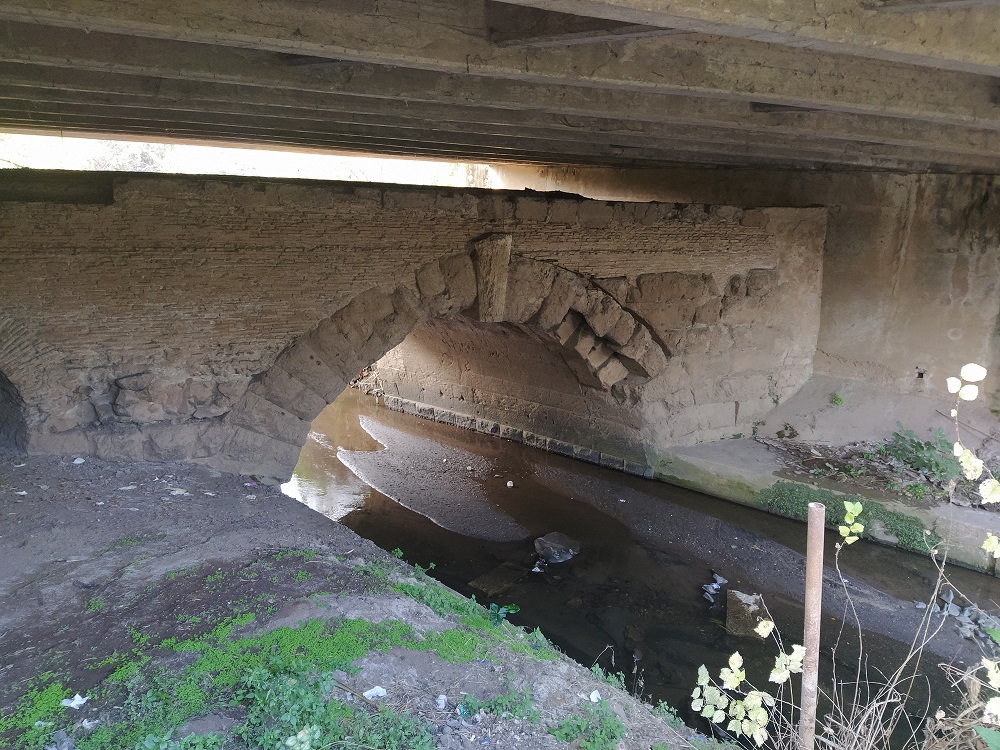 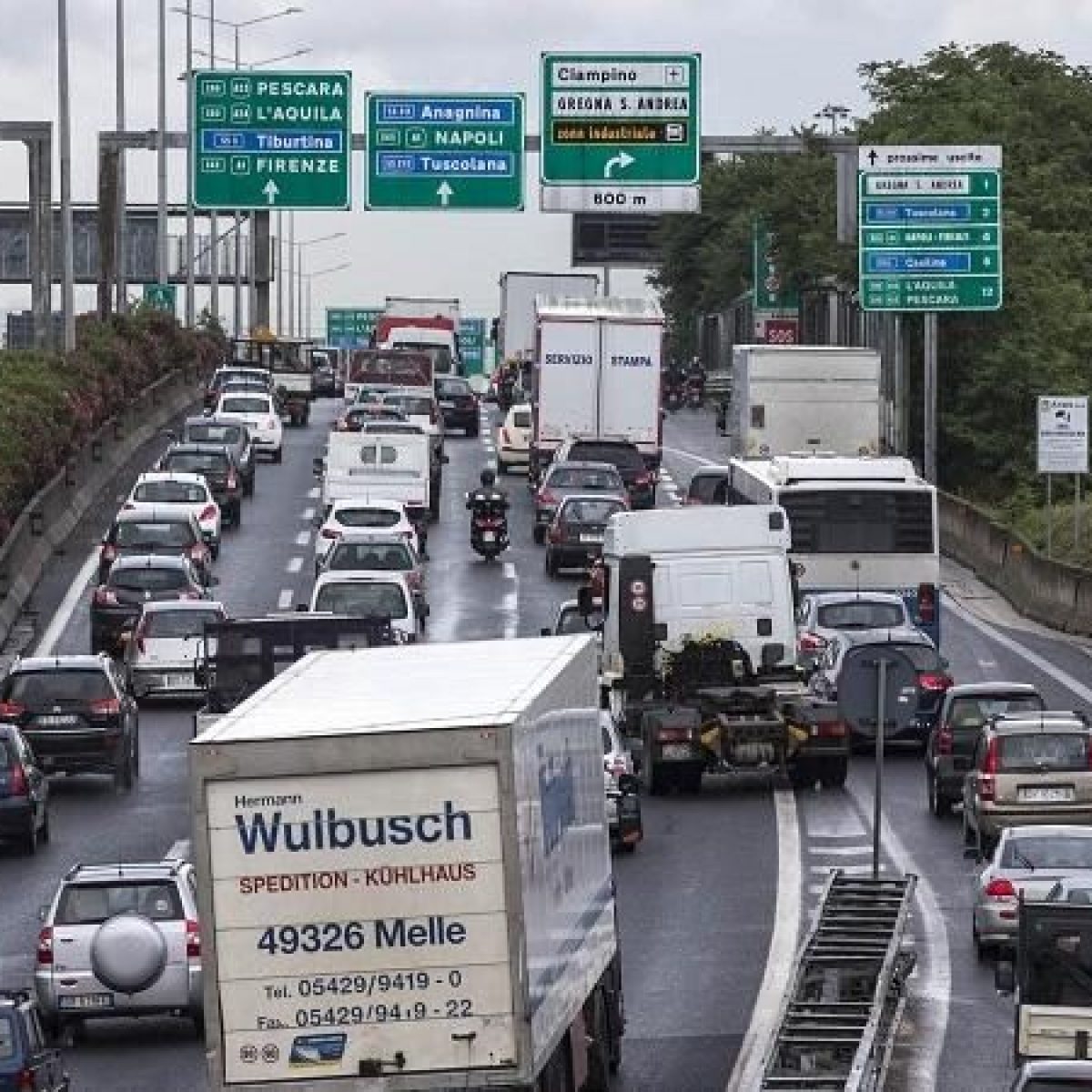 The sun rose.  We probably had snacks.  We saw an ancient bridge mounted like a precious gem in the concrete of a modern overpass.  Ancient and modern… such a surprising overlay (as you can see in the photo).  I wondered: did this ancient bridge belong to the Via Ostiense? A stray biker or two.  Someone jogging.  We finally got to the ring road, the Grande Raccordo Anulare.  Its infelicitous name has always reminded me of some terrible terminal illness.  And it nearly became one, as we forced our way across six lanes of zany Italian traffic (which can be seen in the photo–what a contrast to the silence and serenity of the ancient Roman bridge!).  On the other side of the ring road the Via del Mare waited for us.  Yes, the Via del Mare certainly sounds more pleasant than Grande Raccordo Anulare.  But it wins the award of being one of Italy’s deadliest highways.  We took a deep breath (but not too deep–you know, car exhaust…) and plunged in.  We would be out of the traffic as soon as we found our path…  We kept our eyes peeled.  After a kilometer or two, one of us says, “I’m not sure it’s the path we were intended to take, but it’s better than this major thoroughfare.”  So off we go, following the Tiber River on a goat path.

Maybe it was the right path.  We slowly convinced ourselves.  We couldn’t see other alternatives.  And the map showed a dotted line which the legend said was “a path.”  The wake-up call came when a man walked menacingly out of his house without bothering to call off his dogs. Buongiorno, I called out.  The cheery salutation contained an amazing amount of information, like: I’m not armed; your dogs scare me to death; I’m only passing through, I swear, and as quickly as I possibly can. And I’ll never return.  Promise!

Che volete, he replied. “What do you want.”  It wasn’t a question.  It was a threat.  The smart-ass anarchist with a death-wish in me was ready to reply, “peace on earth” or “a hot coffee, if you’ve got some.”  But with amazing self-control, I babbled, Pare che ci sia un sentiero… O almeno sulla cartina che abbiamo qua, c’e’ un sentiero che va da Roma—noi siamo partiti da Roma centro stamattina—e va fino ad Ostia— “Apparently, there’s a path… Or at least we have a map that shows a path that goes from Rome—you know, we left from downtown Rome this morning—and it goes to Ostia—”

I never finished the sentence, which is fine because I lived to tell the story.  Cro-Magnon man decided we were harmless (and perhaps a tad insane), and whistled at his dogs.  After telling us that he had never heard of this path, he stormed back into his house.  Well, the lack of a path wasn’t good news, was it.  And damn, now that we were speaking terms, why hadn’t I asked him for a coffee!

My then-husband and I blundered on.  Through farmers’ fields, through random suburban parking lots, through more fields—some cultivated, others bristling with thistle.  Gotta love thistle on a cold winter day!  We despaired on the banks of a torrent that blocked our path. In the end, we preferred circumnavigating it to wading through it.  As I write this article, I remember the David Lynch detail that unleashed goosebumps along the entire length of my spine.  The force of the torrent had crammed a mannequin into some reeds and there she bobbed, half-stranded in the mud, half-washed in chilly drainage.  Another unpleasant omen.

Shortly after that, I had a bright idea.  (No, we didn’t turn around and go back.)  I had remembered that my GP’s secretary lived in one of the bedroom  communities that we were about to cross.  I called her.  We were near her place.  She offered us snacks and a coffee.  Bonus!  We chatted for a half-hour and then, two restless exiles, we thanked our host and continued our odyssey.  Thinking about it now, it seems as surreal as crossing the entire Atlas dessert to have a quick tea in Marrakech…

While my then-husband swore copiously under his breath, I was desperately trying to make sense of the map.  Where was this path?  Apparently, we had followed it.  Yet we still had to beat our way through brush and the tangle of ugly commuter towns.  We were almost at Ostia.  I knew exactly where we were on the map, but couldn’t find a path…  It just didn’t make sense.

There was no path.  Cro-Magnon man was right.  The a-hole who published A Piedi nel Lazio used the same dotted line to signify a path and the confines of a property—only that one dotted line was a tad thinner and the other a tad thicker. The relatively straight dotted line that flanked the Tiber River, which seemed like a continuation of the bike path, was really the property line of the government authority responsible for the Tiber.  At that point, it really didn’t matter that there was no path.  We had arrived at Ostia and were soon on the train heading home.

Here are the consequences of this walk:

Part 2: I am Less Young, Single, and Cultivating Foolishness

Well, go figure!  A month ago, I discovered that there really, really, really is a bona fide Rome-Ostia path.  Well… wait!  A bona fide bike path, which goes from Rome to Fiumicino and then from Fiumicino to Ostia and then back to Rome, was inaugurated not long ago.  Bike path–except for a section on the Via del Mare.  (Oh no, not the Via del Mare, again!)  Cyclists are expected to ride for several kilometers on one of Italy’s most dangerous roads, which, I guess—according to local administration—adds a dash of excitement to an otherwise boring 96 km ride! Here’s a link to this just-inaugurate route.

I discovered that a cyclist friend of mine had even ridden the whole thing.  Yes, the Via del Mare is terrifying, he said.  But I already knew that.  Surprisingly, he claimed that the rest of the path was well-signed and a pleasant ride.  The cogs of my diabolical mind started turning.  What if I invert the itinerary and repeat the Roma – Ostia stroll, knowing that the worst it has to offer is three kilometers on a super-busy highway.  The rest is well-signed and pleasant!

So, here’s the plan: when the days start to lengthen again, I’m hitting the trail.  I’m thinking about late February or March.  Fingers crossed, of course, that quarantining won’t be an issue. I’ll take pictures and videos for a follow-up article.  I know most travelers stay in Rome for a handful of days max, and they are usually drawn to its city center, archeological sites, museums, and restaurants.  I have met several travelers however with a penchant for hiking and biking…  So the follow-up article is for them.

Meanwhile, if armchair travelers want to participate directly in the walk, I’ve worked up a gift-list: