What does your favorite Rome guide do now that she is virtually unemployed?  The short answer is I’ve been tidying up a book on the Roman Forum that I would like to have published as soon as possible – perhaps by the end of this year.  Many of you already know that, because you were darling enough to check in on me during Italy’s crisis months.  While the rest of Italy was in quarantine, putting on pounds with home-made bread and pizza, I was hammering out corrections and whipping into shape From Outpost to Empire: The Roman Forum in Ten Easy Centuries.  (The picture you see on the right is just a teaser.  I’m still working on the real cover…) 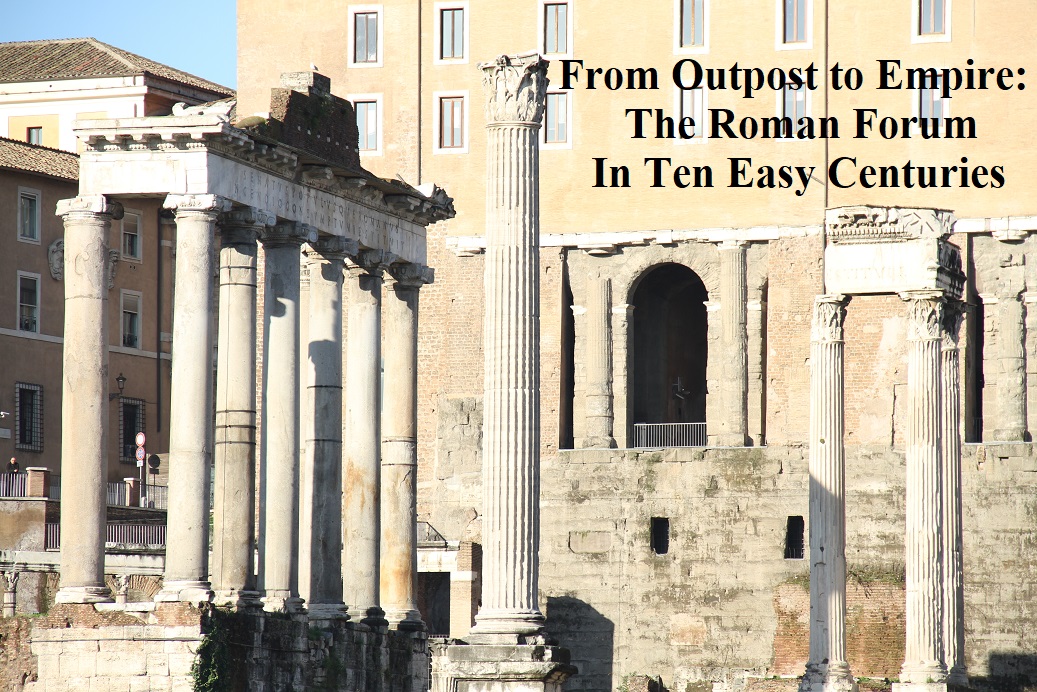 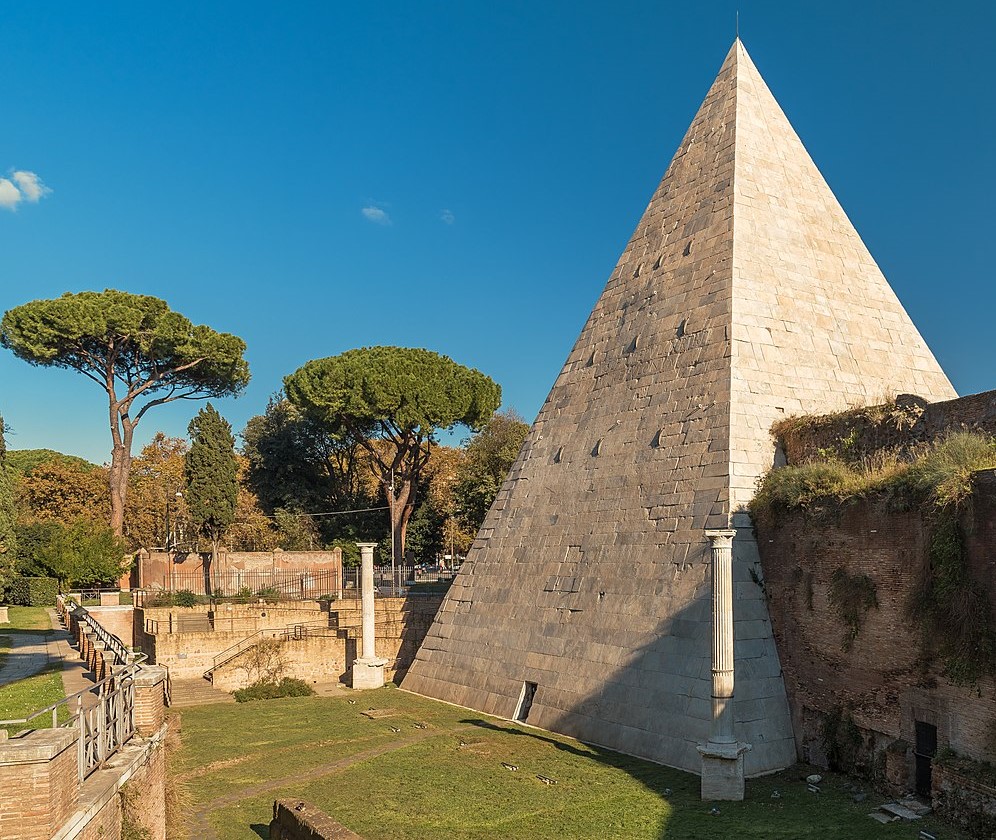 But what does your favorite guide do, when she tires of wrapping up her book on the Roman Forum?  Now that the quarantine has lifted, I’ve been trying to fill some of my many cultural lacunas.  I have quite a few.  As I often joke with visitors touring Rome with me, “I stop at the 1600s.”  So, when an Italian friend said, “Why don’t we go to the Cimitero Acattolico (literally the Non-Catholic Cemetery)?” I accepted the challenge.  The “Non-Catholic Cemetery,” like all things in Rome, has several names just to keep people guessing. In English, it is referred to as the Protestant Cemetery, although it has also been tagged “the Cemetery of Artists” (given the caliber of many of its occupants) and the “Cemetery of Testaccio” (referring to the neighborhood it’s in).  Just two kilometers from my home and in the shadow of Cestius’s Pyramid (which thank the Heavens is ancient Roman), it seemed the perfect place to spend the morning.  I was out of my league, in a world I knew nothing about, temporally or geographically.  After all, the Non-Catholic Cemetery’s history begins in the late 1600s and revolves around (mostly but not exclusively) Northern Europeans.  Furthermore, the visit seemed inexorable in light of my recent economic death.  And I was prehaps hoping that a trip to the historic cemetery might reinforce my belief in a financial resurrection…

Living in a somewhat secular era, we tend to forget that the Vatican regulated people’s lives and, well, deaths in the Papal States (of which Rome was a part) spiritually and temporally until the late 1800s.  The Vatican legislated that the “unclean” (i.e. actors and prostitutes) would be buried on the northern outskirts of town.  Jewish burials were just barely tolerated on the Aventine Hill (to the south of town). In the late 1600s, the Vatican diplomatically granted Protestants, atheists, and… and anyone else who wasn’t Catholic a tract of land next to Cestius’s Pyramid, where locals grazed their livestock.  By the early 1700s, the Cimitero Acattolico boasted burials like those of members of the court of James Stuart (the Old Pretender) and William Ellis (the treasurer of the King of England), earning it the nickname “the English Cemetery.” 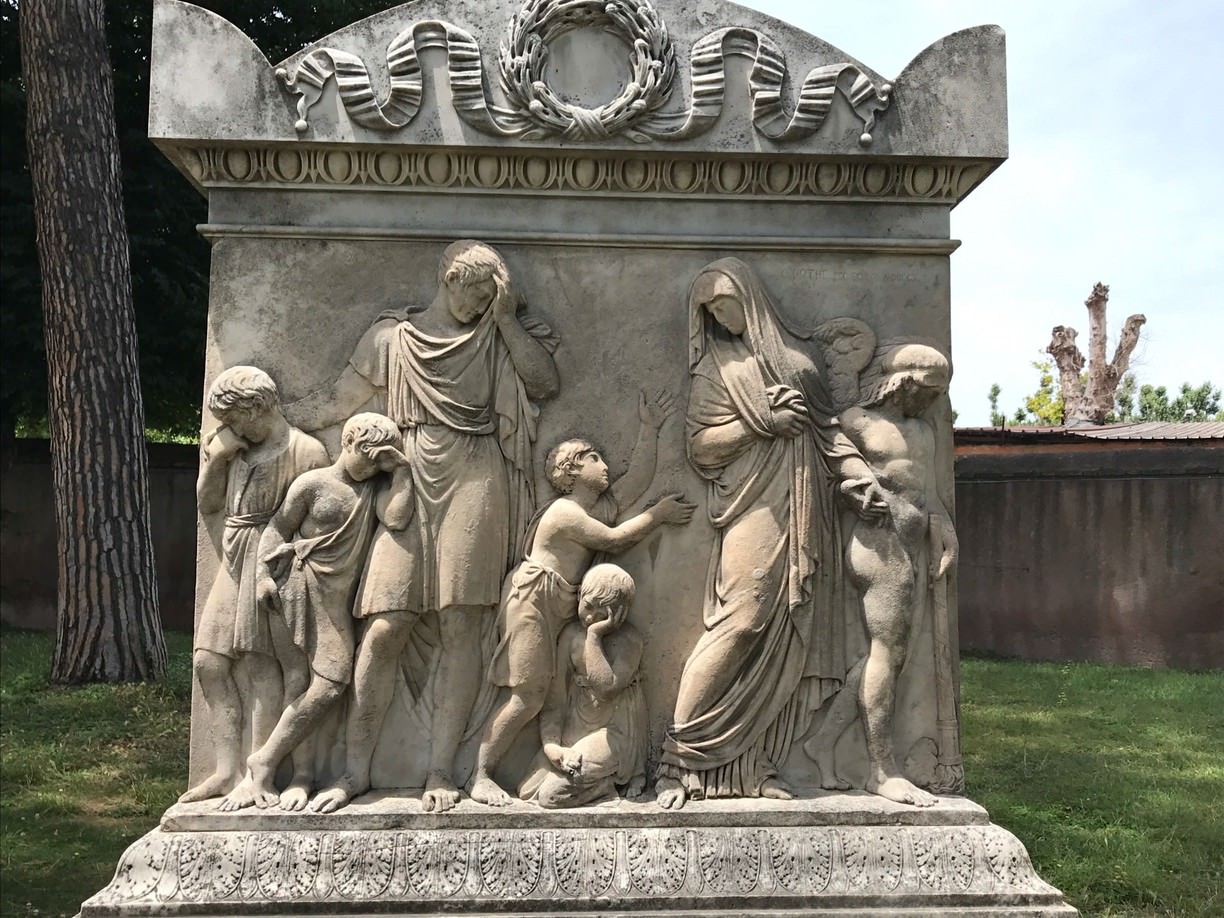 The oldest burials were unmarked.  (I suspect that burials without tombstones discouraged vandalism, since non-Catholic funerals apparently attracted hostility in the cemetery’s earliest years.)  Tombstones slowly became part of the scenery, but the protocol was clear: no crosses, please; classical motifs only.  As a result, the oldest part of the cemetery is dotted with commanding, ancient Roman-style tombs that look like oversized and artsy shoe boxes (like the one on the left). As Rome became increasingly international, as Northern Europeans included it on their Grand Tour, as doctors prescribed its restorative climate to their patients, and as ambassadors traveled here from all over the world to parley first with the Vatican and then with Italy’s government, the cemetery became more crowded and more eclectic. 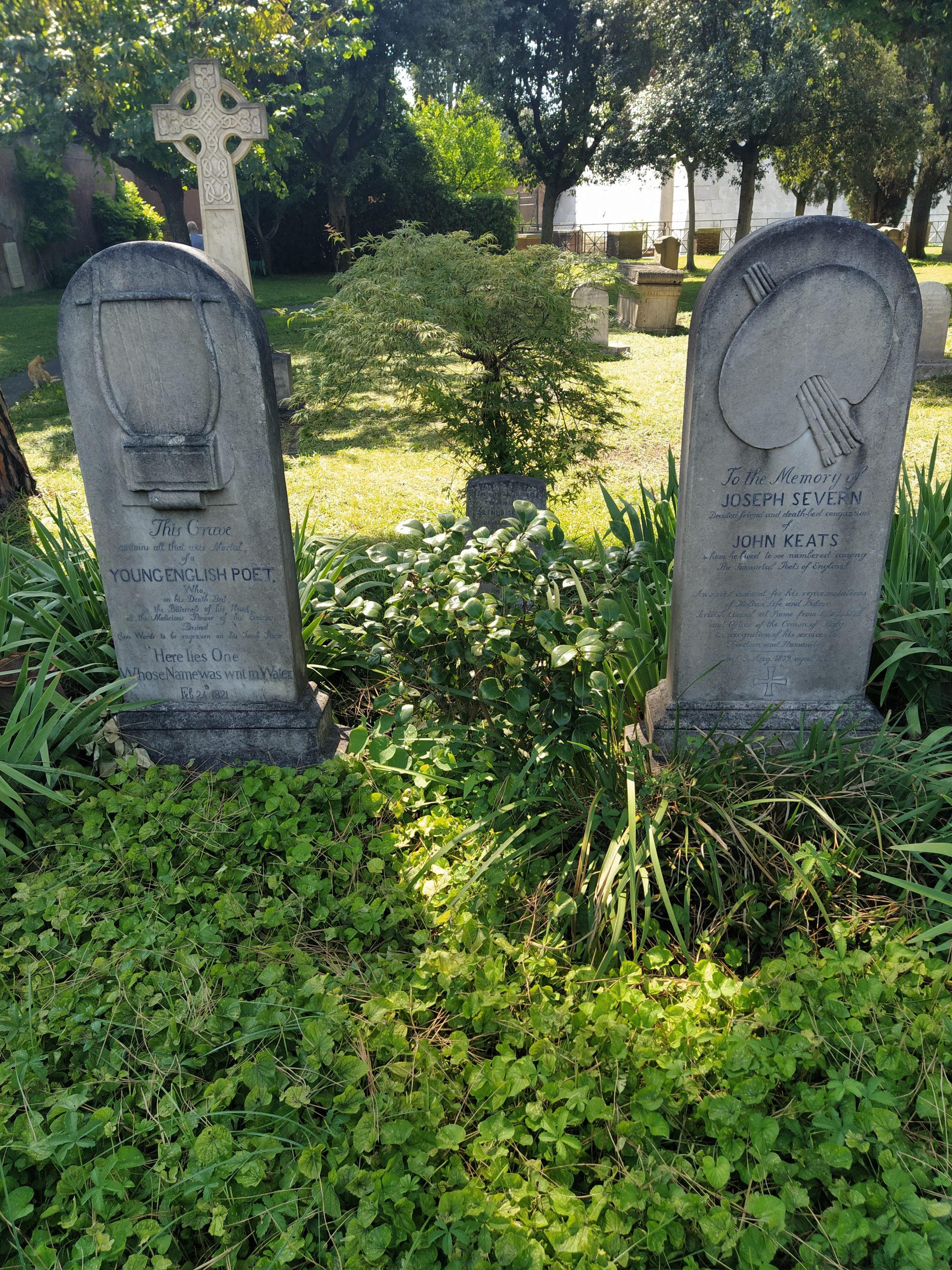 Poet John Keats’s burial was in the older section of the cemetery.  As I contemplated his tomb and his final days in Rome, they seemed strangely contemporary: they revolved around a respiratory disease and quarantining during international travel.  Finding his slow consumption worrisome, his doctors advised him to travel to Rome, where a more temperate climate might improve his health.  After surviving the nervous tension of a storm at sea during his travels, Keats spent ten days in quarantine in Naples, due to a cholera outbreak in England that Neapolitan authorities wanted to keep at bay.  Two months after his departure from London, he reached Rome.  He lived in an apartment on Piazza di Spagna and his last letter (dated 30 November, 1820) describes his losing battle with tuberculosis: “Tis the most difficult thing in the world to me to write a letter. … I have an habitual feeling of my real life having past, and that I am leading a posthumous existence” (from Keats’s letters at the Keats-Shelley House in Rome).

Despite the assiduous cares of his friend, Joseph Severn (with whom he had traveled to Rome) and Doctor James Clark, Keats died on 23 February, 1821. Keats’s friends, presumably Joseph Severn and Charles Armitage Brown, wrote most of the epitaph on his tombstone in the Non-Catholic Cemetery, which was positioned two years after his burial.  The last line is Keats’s: “This grave contains all that was mortal, of a YOUNG ENGLISH POET, who on his death bed, in the bitterness of his heart, at the malicious power of his enemies, desired these words to be engraven on his tombstone: Here lies one whose name was writ in water.”

In the newer section of the cemetery is Percy Bysshe Shelley’s tomb.  Shelley’s story is a little more bizarre.  Question marks and uncertainties regard his death at sea off the shore of Livorno, Italy (in a schooner that his friend Trelawny had engineered).  According to the region’s laws, Shelley’s body had to be buried until Trelawny finished building a suitable cremation oven on the coast.  Shelly’s friends accidentally cracked open his cranium as they prepared him for cremation.  (Guys, the wine was for the cremation oven!)  The last strange omen was Shelley’s heart, which appeared to be fire-repellent.  Struck by the organ licked by flames and yet unscathed, Trelawny burned his hand to save it from the pyre.  Trelawny gave it to another friend, Leigh Hunt, present at the seaside cremation, because Hunt begged for the keepsake—despite Lord Byron’s insistence that it should belong to Mary Shelley.  After much, um, heartfelt squabbling between Hunt and Shelley’s widow, from which Monty Python would have squeezed gallons of laugh factor, Hunt conceded her the organ.  Mary Shelley kept it in her desk for another thirty years—apparently to her son’s surprise when he cleaned out her desk after her death.  On Percy Bysshe Shelley’s tombstone, together with a Shakespeare quote from the Tempest, someone had COR CORDIUM (heart of hearts) written in capital letters.  Surely a typographical error for IECOR IECORUM (liver of livers), since modern science confirms that hearts are highly flammable, while livers are often fire resistant.

Maybe it was time for a coffee or maybe the Non-Catholic Cemetery really was a tragedy magnet.  After all, one of the first tombs I stumbled on belonged to Belinda Lee.  It was enchanting in its simplicity.  My inner archeologist, who is wedded to my inner botanist, immediately fell in love with the spider plant growing out of a fragment of a classical statue’s torso used as a marker.  Belinda Lee’s name drew a blank, but her tomb was fascinating. As I researched, I quickly found Belinda Lee defined as “a green-eyed blonde bombshell.” She stunned the 1950s with her good looks as she acted in increasingly sexy roles.  Traveling to Italy to expand her repertoire, she erroneously ended up with more typecasts roles and a long line-up of married Italian men.  Back in the States, she was traveling with her recent acquisition, the playboy/film producer Gualtiero Jacopetti and his co-producer Paolo Cavara.  Their driver lost control of the car.  She was thrown from it, as it flipped.  She died of a fractured skull and a broken neck, while the three men sustained minor injuries.  This raises questions in my mind, but the answers were cremated with Belinda Lee.  Her ashes were placed in the cemetery at the foot of Cestius’s Pyramid, which had now been reserved for artists of all sorts.  My encounter with Belinda introduced me to recent United States’ history and to the world of cinema—topics which I know almost nothing about.  Next time I go back, I’d like to spend more time with her. 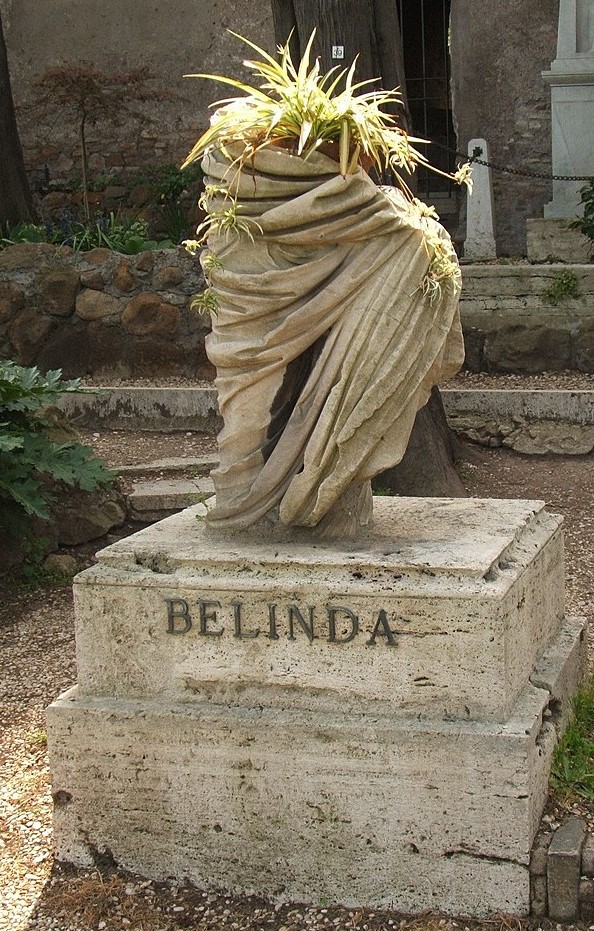 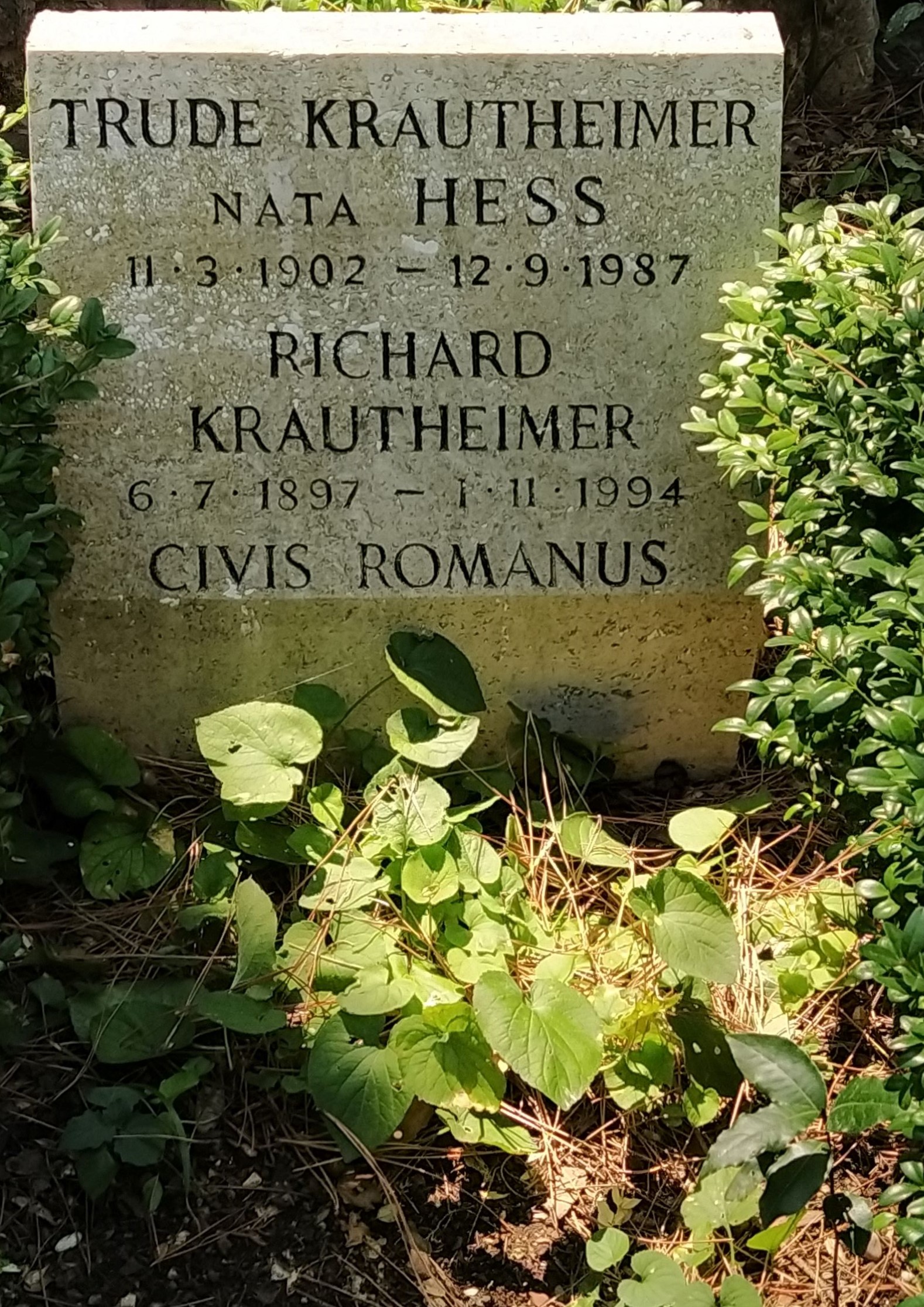 I confess that the visit was really a pilgrimage.  (A pilgrimage in the Non-Catholic Cemetery, is that mixing metaphors or what?)  I was looking for Krautheimer.  “Kraut who?” You ask, “and why?”  Richard Krautheimer is one of my heroes.  Having escaped Nazi Germany, he became Professor of Fine Arts at New York University until 1971, when he retired to Rome to write.  I consider him the Jim Morrison of late Roman/early Medieval history.  As I wrote that somewhat hyperbolic comparison, I reached out my hand and touched his book Rome: Profile of a City (312-1308), which sits on the bookshelf near my desk.  He was one of the first historians I admired for his ability to teach, that is: to share his knowledge and create comprehensible pictures of different eras and cultures.  Unlike so many other luminaries, he never masturbated over his dilated sense of self-worth to sully the scholarship of others.  Arriving in Rome in 1995, I missed him by a year: he had died in 1994.  I would have arrived sooner had I foreseen the paths my life would take me down.  I felt a great deal of relief when I found his tomb, very matter-of-fact and stamped with the Latin Civis Romanus (a citizen of Rome).  The satisfaction of seeing it was equal to my haphazard discovery of Ernest Nash’s burial.

“Ernest Nash?” You say even more perplexed, “Like Krautheimer wasn’t abstruse enough?”  You’re right: Nash doesn’t even make it into the list of notables buried in the cemetery (while Krautheimer and Belinda Lee do).  Just like Krautheimer, Nash left Germany as Hitler’s racial laws intensified.  Unlike Krautheimer, he preferred Italy to the United States—but he too ended up immigrating to the US, as Mussolini partnered with Hitler. Unlike Krautheimer, he changed his name on arrival in the US—from Nathan to Nash.  Just like Krautheimer, however, he was unable to escape Rome’s orbit and returned in 1952, as a photographer of classical antiquity in Rome, Ostia, and Pompeii.  I am eternally grateful to him for creating the Fototeca Unione archive in 1957 at the American Academy in Rome.  I ask myself if the one-fourth of me that is German (and perhaps Jewish) helped bond me to Nash and Krautheimer. 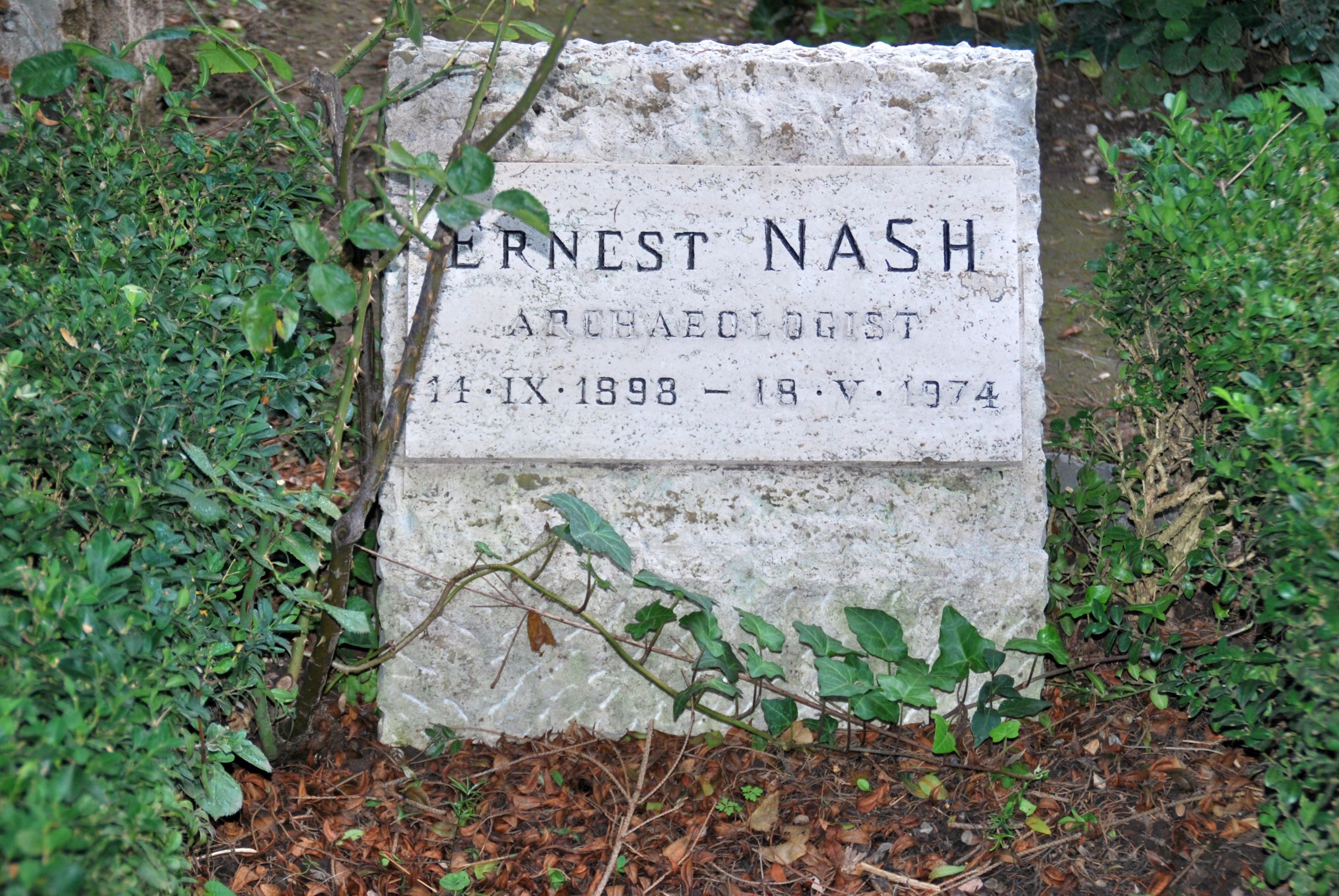 To all these buried treasures with whom I passed the morning, I say, sit terra tibi levis.  This salutation is often found on ancient Roman tombs. “May the ground rest lightly on you.”